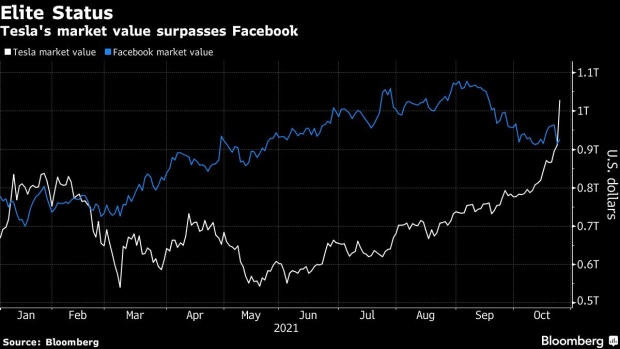 The milestone, which it hit briefly on Friday, was solidified Monday after car-rental company Hertz Global Holdings Inc. said it placed an order for 100,000 Tesla vehicles. Tesla’s shares closed up 13%, the most since March, giving it a market value of $1.03 trillion.

Facebook, meanwhile, closed with a market value of $927 billion, below a high of about $1.08 trillion it hit in early September. Shares faced more pressure on Friday after a barrage of negative headlines, including weak results from social-media peer Snap Inc. Still, Facebook shares rebounded postmarket after it reported strong user growth and a plan to buy back up to $50 billion in stock.