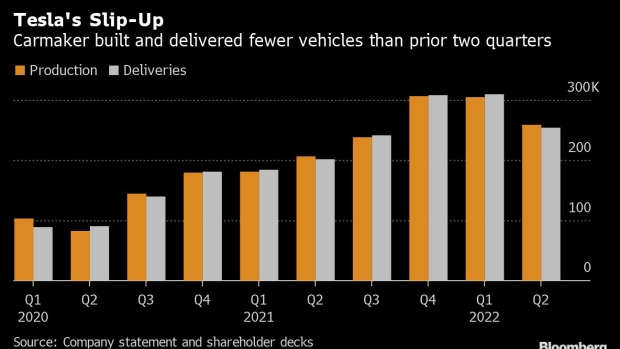 It began with a bang — a huge party celebrating the opening of its newest plant in Austin, Texas — but Tesla’s second quarter didn’t stay ebullient.

Tesla was unable to “pull a rabbit out of a hat,” as Musk put it during the last earnings call in April. While he suggested then there was a chance output would snap back from the disruption in Shanghai and the company might come close to its first-quarter production total, Tesla came up short by almost 47,000 vehicles.

The question now is just how effective Musk and his master of coin, CFO Zachary Kirkhorn, were in limiting the damage to earnings. The company has been crafty in the past with its end-of-quarter pushes, pulling all sorts of levers to get cars to customers and shore up results. While Musk reportedly predicted this one would be “nutty,” he’s seen worse. The risks to Tesla were existential when it struggled to ramp up production of the Model 3 in 2018.

Tesla’s challenges now aren’t life-or-death, but in squaring its pricing changes and belt-tightening with Musk’s priorities and ambitions.

While its mission is to accelerate the world’s transition to sustainable energy, Teslas are increasingly unattainable for mainstream consumers.

And while Musk told a fan club during the quarter that solving self-driving is the difference between Tesla being worth a lot and “ basically zero,” it’s dismissed roughly 200 employees who annotated data for its Autopilot team and closed their office in San Mateo, California.

In fairness, Tesla is far from the only automaker dealing with more demand for its vehicles than it’s able to produce as well as rising commodity prices and energy costs, leaving manufacturers with little choice but to charge customers more. Tesla also is trying to automate more of its annotation work and has been expanding its data-labeling team in Buffalo, New York.

Whereas Tesla’s straightforward price increases may only start flowing through to its financials in the second half — the changes apply to new orders, and wait times for certain models are months long — one alteration to how it’s charging customers will kick in quicker. Toward the end of last month, Tesla brought back what it’s billed as Enhanced Autopilot, a much cheaper suite of features than its Full-Self Driving package. The former costs $6,000, half the price of the latter.

The blog Electrek’s take on this was that Tesla is probably aiming to improve its margins with an Enhanced Autopilot offering that will have a higher take rate. The change doesn’t cost the company anything, since it equips cars with the same hardware and has the ability to activate software over-the-air.

Musk tends to speak frankly about the economy and has said recently the US probably is in recession or headed for one. When it comes time to talk Tesla, though, he’s generally more inclined to assure investors of rosy days ahead. The company has already provided a hint of this: In reporting second quarter deliveries of 254,695 vehicles, short of what analysts were expecting, Tesla took pains to note that it produced more cars in June than any month in its history.