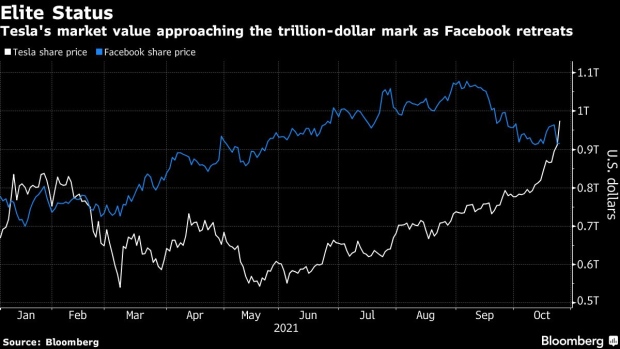 (Bloomberg) -- Tesla Inc. is on its way to joining an elite group of companies with market values of at least $1 trillion, a key milestone for the Elon Musk-led carmaker whose shares have been on a tear amid a global shift to electric vehicles.

The maker of the Model 3 sedan -- the top-selling electric car worldwide -- is poised to be be the second fastest company ever to reach this mark, taking just over 11 years since its public debut in June 2010. Facebook Inc. did it faster, although its market capitalization is now below $1 trillion as the stock has sold off over the past two months. The other U.S.-listed members of the trillion-dollar club include Apple Inc., Microsoft Corp., Alphabet Inc. and Amazon.com Inc.

Tesla’s stock jumped as much as 7.7% on Monday, the biggest intraday move since April 13. It’s currently trading above $970, a new record. But it needs to be at or above $995.72 for the market capitalization to touch a trillion, based on about a billion shares outstanding as of Oct. 21.

Tesla shares have been on a streak over the past five months, climbing over 70% since mid-May. However, the rally got a big boost this month amid a flurry of encouraging headlines: strong third-quarter earnings and deliveries, a big order from car-rental giant Hertz Global Holdings Inc., and a report that the company’s Model 3 was the top-selling vehicle in Europe last month.

“Tesla is the leader in EV manufacturing, batteries and autonomy,” Morgan Stanley analyst Adam Jonas wrote in a note on Monday. “Tesla also has a suite of enabling technologies and other businesses that would allow the company to be an auto and energy champion in the long run.”

The push toward electrifying all modes of transportation -- especially cars, trucks, buses and vans -- has rapidly intensified this year, with governments pledging to find solutions for the climate-change crisis.