A Tesla logo sits on the wheel hub of a Tesla Inc. Model S electric vehicle at a Supercharger station in Egerkingen, Switzerland, on Thursday, Aug. 16, 2018. , Bloomberg

Tesla Inc. (TSLA.O) raised US$2.35 billion through debt and stock offerings that were boosted from the company’s initial plans.

The electric-car maker raised US$750 million of common stock priced at US$243 per share and borrowed US$1.6 billion through an offering of convertible bonds due 2024 at a 2 per cent coupon and a 27.5 per cent conversion premium, Tesla said Friday in a filing. Tesla stock, which had been down 30 per cent this year, closed 4.3 per cent higher Thursday while the price of its bonds advanced.

Tesla tapped the markets again after Elon Musk overestimated the ability of the Model 3 sedan to generate enough cash for the company to be self-sustaining.

“We view this as a clear net positive for Tesla,” Dan Ives, an analyst at Wedbush Securities, said in a note. The electric-car maker needed to “take its medicine and clear the air of the very real investor worries.”

Tesla’s chief executive officer said on several occasions last year that Tesla would no longer need to raise capital as its first mass-manufactured car ramped up. Musk changed his tune after the first quarter, when a record decline in vehicle deliveries and the company’s biggest-ever debt payment depleted its cash balance to a three-year low of US$2.2 billion.

Musk, 47, will participate in the offering by buying as much as $10 million in stock, according to a filing Thursday. Tesla hired Goldman Sachs Group Inc., Citigroup Inc., Bank of America Corp., Deutsche Bank AG, Morgan Stanley, Credit Suisse Group AG, Societe Generale SA and Wells Fargo & Co. to underwrite the share offering, according to the filing.

The convertible bonds priced at the high end of the initial range communicated to investors, allowing Tesla to boost the size of the offering. Earlier Thursday, the securities were being marketed with a coupon of between 1.5 per cent and 2 per cent, according to people with knowledge of the matter. The conversion premium was being talked at a range of 27.5 per cent to 32.5 per cent, said the people, who asked not to be identified discussing the private deal terms.

Tesla’s 5.3 per cent bonds due 2025 were among the best performers in the U.S. high-yield market Thursday, rising more than 1 cent on the dollar to 87 cents, according to Trace. Credit default swaps tied to the debt rallied the most since October. It now costs about $1.6 million upfront to insure $10 million of Tesla bonds against a default for five years, down from $1.7 million Wednesday.

After reporting a loss per share that was double what Wall Street expected, Musk sought to assure investors on Tesla’s April 24 earnings call that the company would return to profitability in the third quarter. He told analysts there was “merit to the idea of raising capital” to expand.

Several Tesla analysts were expecting a capital raise of about $2 billion. The infusion will get Tesla closer to a ratio of 15 per cent of cash to sales, a historical level among traditional auto manufacturers and suppliers, according to Bloomberg Intelligence analyst Joel Levington. Tesla has stayed at around half that level, he said. 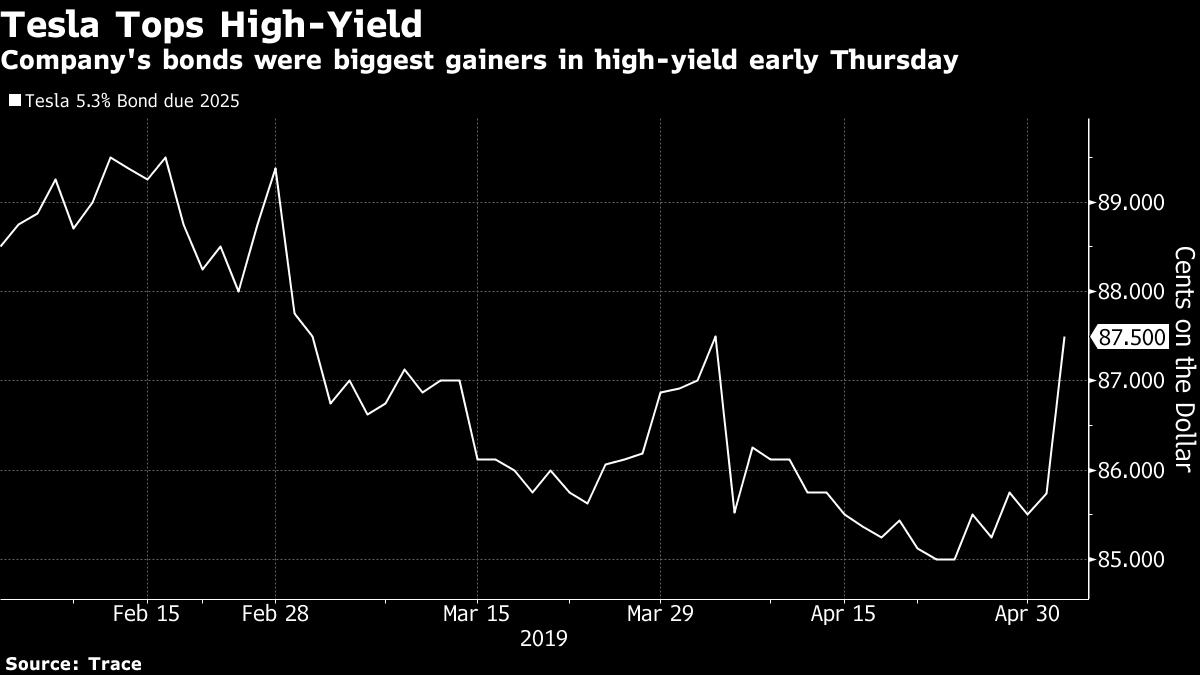 “This indicates Tesla can’t yet rely on cash from operations to fund its deeper penetration into autonomous-driving technology, advanced chips, insurance and China. Tesla’s 31 per cent delivery decline in 1Q vs. 4Q signaled that U.S. demand isn’t sustainable at the elevated 2H levels, while its international rollout is just beginning."-- Kevin Tynan, senior autos analyst Click here to read the research

Tesla is planning as much as US$2.5 billion in capital expenditures this year as it develops new vehicles including the Model Y crossover, Semi truck and Roadster sports car. It’s also building a battery and vehicle factory near Shanghai where it plans to begin producing Model 3s later this year.

--With assistance from Drew Singer and Claire Boston