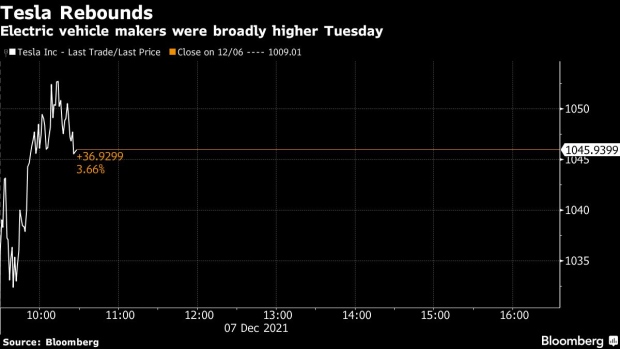 (Bloomberg) -- Tesla Inc. rose the most intraday in over a week, tacking nearly $40 billion back onto its market value, as electric vehicle makers and the broader stock market rallied.

Tesla, which lost 6.2% last week and extended its decline Monday to briefly fall over 20% from its Nov. 5 high, helped fuel positive sentiment for other EV makers. UBS boosted its price target to $1,000 from $725 and said the company is “cementing” its leadership as the electric-vehicle market takes off. Tesla rose as much as 4.4% Tuesday, its strongest intraday gain since Nov. 29.

“Tesla is likely to continue beating consensus expectations also in 2022 in terms of top line growth and margins, in a global EV market that keeps accelerating rapidly,” UBS analyst Patrick Hummel, who has a neutral rating on the stock, writes in a note.

Among EV makers, top performers included Lordstown Motors Corp. which rose as much as 7.4% and Sono Group NV, which was higher by as much as 6.6%. Charging firm Blink Charging Co. also gained as much as 6.8%.