Tesla Inc. shares struggled Tuesday as the electric-vehicle maker’s production woes in China refuse to go away, leading another analyst to slash his 12-month price target on the once high-flying stock.

“With about 13,000 units of production per week and higher than average margins, any production loss at Shanghai is bound to have a significant impact on margins and earnings,” said Daiwa analyst Jairam Nathan, who cut his price target to US$800 from US$1,150.

Until recently, Tesla was considered the ultimate growth stock, rising 50 per cent last year and closing at US$1,145 on April 4, when CEO Elon Musk announced his 9.2 per cent stake in Twitter Inc. Since then, Musk has been engaged in a highly public attempt to buy the social media platform. And Tesla’s stock has been in a freefall, sinking to US$620.57 at its lowest on Tuesday and wiping out almost half its market capitalization after touching a record high in November.

Since Musk revealed his Twitter stake, Tesla shares have plunged 42 per cent compared with a 13 per cent decline in the S&P 500 Index and a 26 per cent drop in the S&P 500 consumer discretionary sector. It’s the seventh-worst performing stock in the S&P 500 over that time and the third-biggest drag in terms of index points.

Tesla also has dramatically underperformed most of the market’s other major tech growth stocks since April 4, including Facebook parent Meta Platforms Inc., Apple Inc.. Amazon.com Inc. and Google parent Alphabet Inc. Streaming service Netflix Inc. is the only FAANG name to be putting up a worse performance than Tesla since the news broke of Musk’s Twitter position. 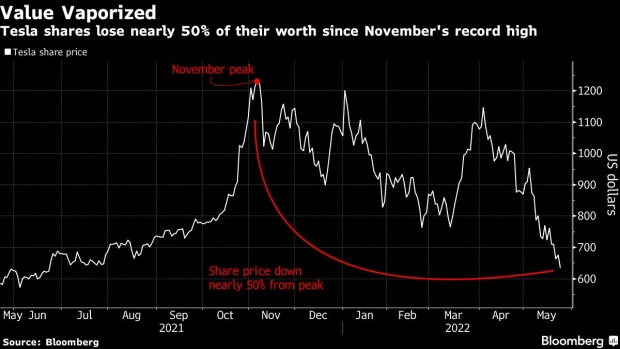 All of this helps explain why Musk’s highly-public back-and-forth with Twitter has captivated markets, particularly as he sold US$8.5 billion of Tesla stock to pay for the buyout. With the billionaire’s seeming recent reluctance to go forward with the purchase, Musk and Tesla are getting the wrong kind of publicity at a pivotal time for investors. The deal spread, or the difference between Musk’s offer price and Twitter’s share price, is US$18, the widest since the takeover plan was announced in April.

Beyond the Twitter distraction, Tesla’s key Shanghai factory has faced disruptions due to long-running COVID-19 lockdowns in the city. The company also was dropped from the ESG version of the S&P 500 earlier this month, a move that could lead to some forced selling by funds benchmarked to that gauge. The company has also dealt with the supply shortages and surging raw material costs that other automakers face.

“Tesla is a high-growth company, so the majority of its valuation is driven by future growth expectations,” said Seth Goldstein, equity strategist at Morningstar Research Services. “Even small changes in future growth assumptions can have a large impact on the stock’s valuation.”