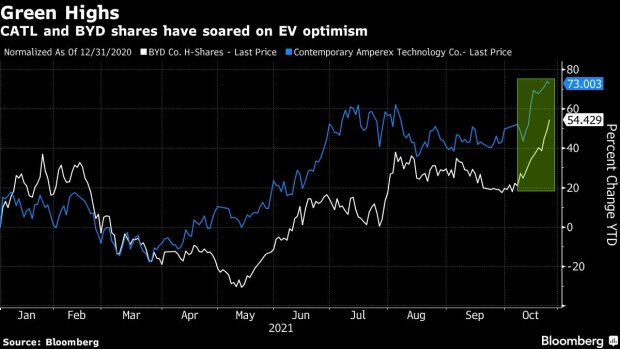 A Tesla Inc. electric vehicle charges at the automaker's showroom and service center in Sydney, Australia, on Monday, April 12, 2021. Tesla and the electric-car industry generally thrive in the world’s richest nations. Not so in Australia, where even tractors outsell EVs two to one. Photographer: Brent Lewin/Bloomberg , Bloomberg

Shares followed bellwether Tesla’s lead as its stock surged 13% overnight after Hertz Global Holdings Inc. placed an order to buy 100,000 Teslas, the single-largest purchase ever for EVs. The move also sent the carmaker’s market value above $1 trillion for the first time.

Rival BYD rose as much as 7.2% in Hong Kong to a record after saying the local bourse approved its plans to spin off a semiconductor unit, while Tesla supplier CATL climbed as much as 4.5% before giving up its advance. Most Asian stocks tied to EVs such as China’s Tianqi Lithium Corp., Japan’s Panasonic Corp., South Korea’s LG Chem Ltd. and Taiwan’s Hota Industrial Manufacturing Co. also gained.

Tesla’s order win shows that countries and corporations are rapidly vaulting electric vehicles further into the mainstream as the push for electrifying transportation intensifies in the fight against global warming. The entire electric-vehicle ecosystem -- including carmakers, battery developers and charging-network operators -- has been climbing as a result.

The Tesla order has “triggered investment sentiment for other EV stocks,” as the fourth quarter is normally the peak season for sales in the sector, said Toliver Ma, an analyst at Guotai Junan Securities Co. “EV stocks have a lot of positives at the moment.”