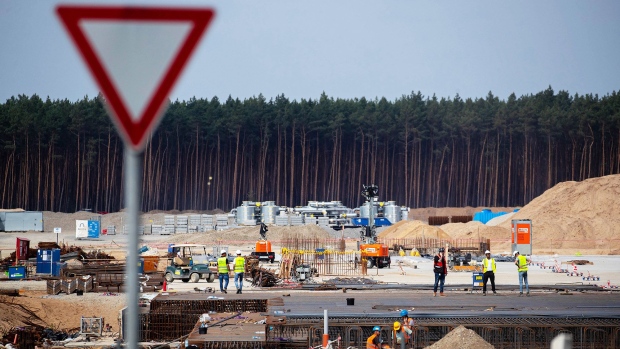 (Bloomberg) -- Tesla Inc.’s unfinished German factory may see more delays because local authorities plan to repeat a public hearing that was supposed to be the final hurdle for the project’s approval.

Environmental authorities in the state of Brandenburg said Thursday the online consultation process that wrapped up earlier this month needs to be held again in November to bolster the legal security of the process.

The move is poised to push back a decision on final approval, threatening Chief Executive Officer Elon Musk’s plan to start production at the factory outside Berlin in November or December.

Tesla is still awaiting final approval for the project that underpins its European expansion plans just as Volkswagen AG, Daimler AG and BMW AG broaden their EV lineups. For Germany, the plant in the small town of Gruenheide promises new jobs in a region that has lost much of its heavy industry during World War II.

Progress at the site has been less smooth than hoped, with Tesla facing lawsuits from environmental groups concerned about water use and wildlife, and the plant has already been delayed by several months. Tesla eventually plans to make as many as 500,000 vehicles at the factory, alongside production of battery cells.

Locals had filed more than 800 complaints for the online discussion that wrapped up on Oct. 14. The region’s environmental authorities have vowed to make a decision on final approval only after that process ends.