Tesla Inc.’s stellar first-quarter delivery numbers that blew past analysts’ estimates helped it defy a selloff in the broader electric vehicle industry, amid a growing skepticism about the future of President Joe Biden’s infrastructure bill.

Shares of the Elon Musk-led company jumped as much as 7 per cet in New York, erasing most of its year-to-date loss. Over the past year, the stock has advanced more than 600 per cet.

EV companies overall have received some good news in the past week, including a big push into electric vehicles in the infrastructure spending bill unveiled last week, and the estimate-crushing delivery figures from Tesla. But that may not be enough to stop a slide in the stocks that has seen investor interest wane this year. Auto stocks, EV and otherwise, have also been plagued by a global shortage of semiconductors.

“The rhetoric around Biden’s infrastructure stimulus is what’s creating the weakness,” Roth Capital Partners analyst Craig Irwin said in an interview, discussing the EV selloff. “There is low certainty this will pass as proposed,” the analyst said.

However, the underperformance in EVs is probably misplaced, Irwin said, noting that both political parties like the domestic success story of Tesla and would welcome a revival of Detroit with EVs.

Biden’s infrastructure bill has already started facing its challenges, with Republicans saying they want no part of the corporate tax hikes needed to pay for the plan and some progressive Democrats saying the package would not spend nearly enough. 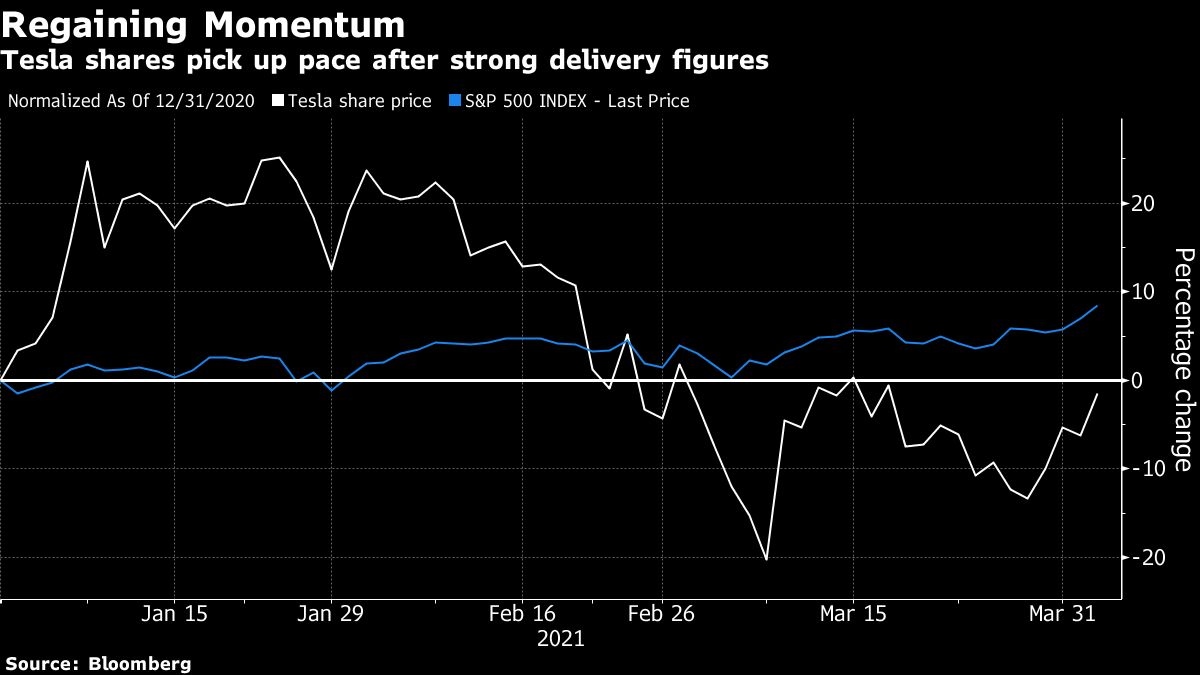 Most EV companies’ shares fell on Monday. Lordstown Motors Corp. sank as much as 5.2 per cet, Nikola Corp. dropped 5.4 per cet, Fisker Inc. fell 4.1 per cet and XPeng Inc. lost 2.8 per cet.

Tesla on Friday said it delivered 184,800 cars worldwide for the first quarter of the year, outpacing the 169,850 average of analysts’ estimates in a Bloomberg survey. While the company does not break out sales by geography, U.S. and China are its largest markets and the company said it was “encouraged by the strong reception of the Model Y in China.”

Models 3 and Y, which accounted for almost all of the sales in the period, are manufactured in Tesla’s plants in Fremont, California and in Shanghai, China.

“Receptivity to the Model Y in China was always a gray area in our minds since there was never disclosure on deposit/interest levels from Tesla,” Cowen analyst Jeffrey Osborne wrote in a note, adding that the strength in that country appeared to have driven sales.

Several Wall Street analysts raised their estimates and price target on Tesla after the sales results. JPMorgan Chase analyst Ryan Brinkman said its ability to produce roughly the same amount of vehicles in the first quarter as in the last three months of 2020, stands out in the industry, given global light vehicle production is estimated to have declined about 16 per cet sequentially in the same period because of the chip shortage.