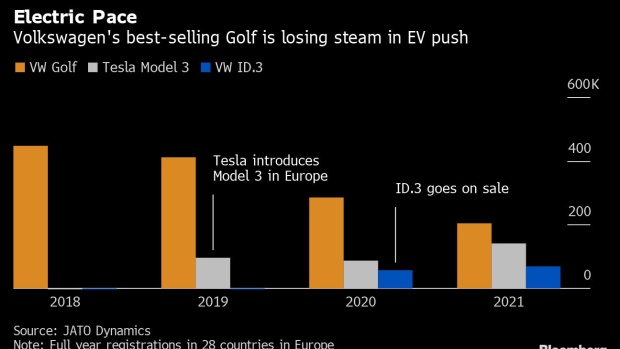 A Tesla Inc. Model 3 electric automobile recharges at a charging station beside a canal in Amsterdam, Netherlands, on Monday, April 1, 2019. With 5,315 new cars registered, Tesla’s Model 3 accounted for 29 percent of the new sales. , Bloomberg

(Bloomberg) -- Tesla Inc.’s Model 3 was Europe’s top-selling electric car in 2021 as battery-powered vehicles emerged as a bright spot for an industry besieged by lockdowns and a shortage of semiconductors.

The Model 3, pushing Renault SA’s Zoe off the top EV spot, also vaulted past some of the region’s most beloved models like Volkswagen AG’s Tiguan and Peugeot 3008 SUVs for 17th place in the overall ranking, up from 41st in 2020, according to analytics firm Jato Dynamics. Tesla’s rise stood in contrast to a decline of traditional favorites like the best-selling VW Golf, which posted the biggest market share drop.

VW’s electric ID.3, launched in 2020, failed to replicate Tesla’s success, coming in 53rd in the ranking, Jato said. The overall market declined to 11.8 million vehicles, the lowest level since 1985.

“Crisis after crisis had a negative impact on demand and registrations in the market,” said Felipe Munoz, an analyst at Jato. “The ongoing uncertainty of the Covid-19 pandemic, alongside the prolonged semiconductor shortage created a perfect storm.”

Carmakers like VW and Stellantis NV are spending billions on rolling out a range of plug-in hybrid and battery-powered models, with consumers responding to generous subsidies to help cut emissions from the transport sector. Jato expects electrified cars to outsell diesel vehicles in 2022.

New challengers are emerging in the changing market. In 2021, Hyundai Motor Co. and affiliate Kia Corp. increased their market share in Europe by almost two percentage points to 8.6% due to their line up of SUVs and electric models, Jato said.