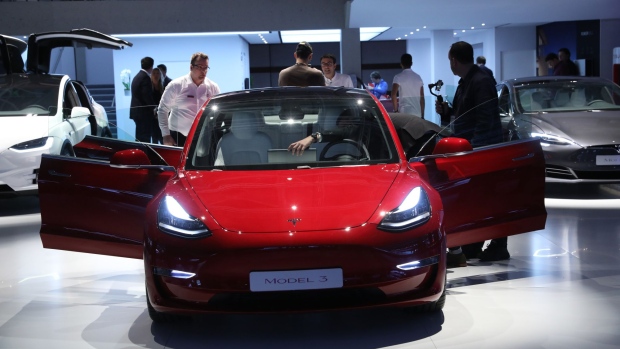 The U.S. carmaker’s most-affordable vehicle leads all purely battery-powered autos through June with 66,350 units sold, according to Jato Dynamics, a research firm. The Model 3 ranks No. 25 overall year-to-date, reflecting Tesla’s tendency for erratic month-to-month deliveries that tend to surge at the end of each quarter.

Generous incentives are enticing consumers to trade in combustion-engine cars, with battery and plug-in hybrid models more than doubling their market share last month to 19%. Tesla shipped 25,697 Model 3s to customers, up from a monthly average of just over 11,000 cars for the year.

The Model 3 came out on top despite an aggressive push by incumbent carmakers to expand their lineups of electric models. Volkswagen AG, Europe’s biggest automaker, has set a goal to eclipse Tesla in worldwide EV sales by 2025.

Among VW’s new models this year are the VW ID.4 and the Audi Q4 e-tron, two crossovers that are roughly the size of Tesla’s popular Model Y.