'There is no competition for Tesla', bullish on new Model Y: Shareholder

You had to be there. To really see Tesla Inc.’s new Model Y, that is. Those catching the livestream of Thursday night’s unveiling of the company’s compact SUV, as I did, got a relatively brief look at the Y. Much of the event was taken up with something like a greatest-hits rundown of Tesla’s previous vehicles, both real and promised. CEO Elon Musk poked at naysayers past who called electric vehicles a fraud, quipping “you can buy that fraud,” drawing cheers from the crowd.

The actual unveiling of the new vehicle – just one of them and mostly from wide angles – felt relatively low-key, though. Maybe that was the point.

Tesla ultimately needs the Y, and not just so Musk can complete his elaborate “S3XY” license-plate joke. Broadly speaking, SUVs are in and sedans are out in the U.S. If Tesla’s serious about truly breaking into the mass-market – and its US$50 billion market cap dictates it must – it needs to tap into that.

Tesla’s more immediate needs, however, are likely cash and re-setting the narrative.

Whereas Tesla’s drama used to unfold at the pace of a TV series, the past six months or so have felt more like a Netflix binge. Beginning with the “funding secured” episode last August, we’ve been treated to a series of twists including, most recently: the sudden retirement of the CFO; the sudden job cuts and price cuts; the sudden unveiling of the US$35,000 Model 3 variant; the sudden departure of the general counsel (after two months in the job); the sudden ditching of Tesla’s retail network; the sudden retention of most of that retail network; and the sudden contempt claim slapped on Musk by the SEC over his tweeting habit.

Unveiling a new product usually gets people refocused away from Tesla the company toward Tesla the machine/lifestyle/aspiration. The Model Y is something of a wrinkle in this regard because it shares so much architecture with the vehicle Tesla is already trying to push, the Model 3. From what I could see online, the Y essentially looks like a bigger Model 3, with room for an optional third set of small seats at the back. As a design decision, this makes sense; sharing platforms is how auto-makers keep costs down. But it also means that if you’re already pushing hard on the original model, there’s a possibility that new-car smell lures potential buyers away from taking the plunge today and waiting for the next iteration. 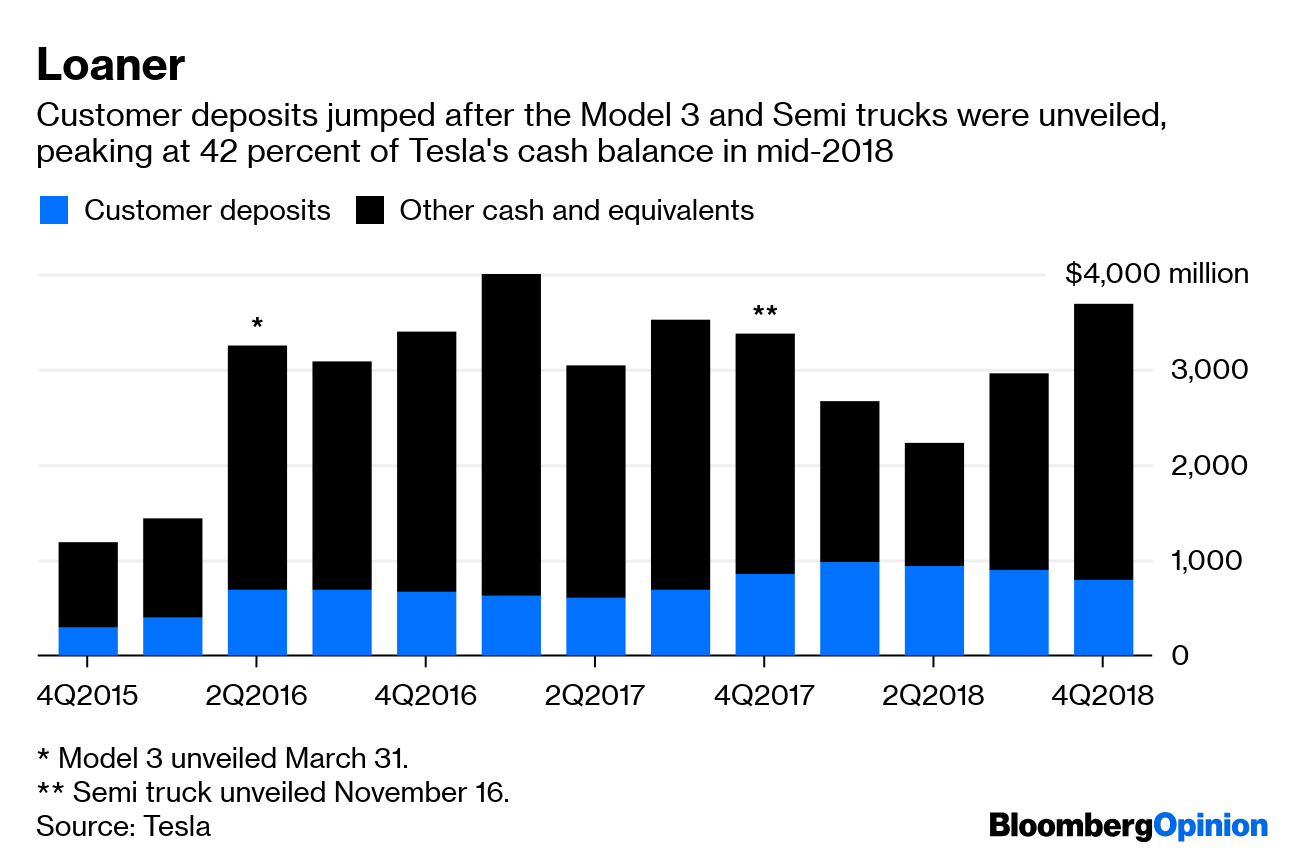 One potential rationale for doing this just two weeks after Tesla sprung the US$35,000 Model 3 is cash. When the livestream ended, I was redirected to a page where I could configure and pre-order a Y for an immediate payment of US$2,500 (always be closing, people). The earliest I would receive it, according to the site, would be Fall 2020 if I order a higher-spec version and 2021 if I went for the standard model.

As Tesla did successfully with the Model 3, this would effectively entice potential buyers to provide unsecured, refundable, zero-interest financing for the company. Customer deposits have been an important part of Tesla’s cash balance over the past few years, especially in 2018. While the proportion dropped in the latest quarter, Tesla just had to pay out almost US$1 billion on maturing convertible bonds. And – after its recent profit warning and amid apparently frantic efforts to slash costs, hold down capex, and push metal out the door – estimates for free cash flow this quarter have turned negative again.

So the US$250 million that, say, 100,000 pre-orders for the Y could bring in before the end of the quarter, roughly two weeks away, would be useful. And, just possibly, the long-dated delivery schedule (before factoring in any buffer for delays) might thread the needle on bringing in fresh deposits without diluting Model 3 demand too much. On the other hand, the Y's incremental change, higher price and long delivery schedule could limit interest. More competing models will also be available by 2020. In any case, we will get clues on how the tease worked out in early April, when Tesla reports first-quarter sales, and in six weeks or so when it updates its balance sheet.

Yet it is notable that Tesla has taken the risk of diluting sales of its key product at all. The acceleration of Tesla’s story-line provides momentum. But, as the “production hell” of a year ago and the recent strategic u-turn (and counter u-turn) on retail demonstrate, it also generates whiplash. Tesla’s stock opened down on Friday. If that carries through to the close, it’ll be in marked contrast to the market’s reaction to the Model 3 and the Semi. You have to ask yourself why.