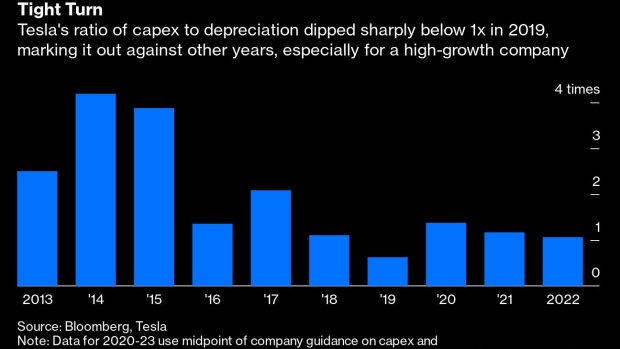 RIEDEN, GERMANY - JUNE 11: A Tesla electric-powered sedan stands at a Tesla charging staiton at a highway reststop along the A7 highway on June 11, 2015 near Rieden, Germany. Tesla has introduced a limited network of charging stations along the German highway grid in an effort to raise the viability for consumers to use the cars for longer journeys. (Photo by Sean Gallup/Getty Images) , Photographer: Sean Gallup/Getty Images Europe

(Bloomberg Opinion) -- If it involves a flurry of announcements, filings, subpoena disclosures, a stock with Lebowski levels of insouciance, a surprise equity raise and Larry Ellison backing up the truck, then we must be talking about Tesla.

It’s been a busy Thursday morning for the electric-vehicle phenomenon. Not long after Tesla Inc. filed its 10-K annual report, the company announced it would sell up to $2.3 billion worth of new equity, with CEO Elon Musk and director Ellison indicating their “preliminary interest” in buying $10 million and $1 million worth, respectively.

The 10-K itself contained several interesting details. There was a reference to a subpoena from the Securities and Exchange Commission seeking information on unspecified contracts and financing arrangements. Regional data for 2019 showed sales in Tesla’s biggest market, the U.S., fell by 15%. Meanwhile, the full cash flow statement confirmed that $204 million of fourth-quarter cash from operations was largely a mix of foreign-exchange gains and amortization and write-down effects. As I wrote here, along with a positive swing in working capital and sales of regulatory credits, those “other” items contributed more than half of Tesla’s free cash flow in the quarter.

Let’s stay with free cash flow. Another item in the 10-K was Tesla’s capital expenditure guidance. This is notable because management was unusually reticent on that item when it announced year-end results about two weeks ago, telling investors and analysts to wait for the filing. It is also notable because the new guidance implies a jump of somewhere between 88% and 164% this year — and maybe staying there through 2022.

One of the strange things about Tesla is that its valuation and ambitious narrative are pure growth-stock stuff, but its capex in 2019 was more like that of an old car business. At 62%, its ratio of capex to depreciation wasn’t much different from the 54% reported by General Motors Co. Now it seems as if Tesla will make up for that and then some. Plotting the new guidance versus consensus forecasts shows just how much last year stood out in this regard.

Which brings us back to the surprise equity raise. It’s a surprise because, about two weeks ago, Musk answered a question on this very subject by saying “it doesn’t make sense to raise money because we expect to generate cash despite this growth level.” It’s also a surprise because Tesla had $6.3 billion of cash and equivalents on its balance sheet at the end of December. Plus, the company expects “positive quarterly free cash flow going forward, with possible temporary exceptions.” Certainly, current consensus forecasts for free cash flow imply Tesla could absorb the jump in capex without resort to new financing.

It shouldn’t be that surprising, though. Tesla’s stock has gone parabolic. Just six months ago, a $2.3 billion equity raise would have diluted shareholders by almost 6%; at today’s price, it’s just 1.6%. Investors may as well be begging the company to sell more equity (Musk’s compensation package encourages this too).

In that sense, Tesla is doing the sensible thing by giving the punters what they want and shoring up its balance sheet. And yet, alongside the stalled growth in revenue, losses and capex-budget boomerang, doing the sensible thing also happens to undercut the price-boosting narrative that Tesla has turned the corner on self-funding. Even if companies can sell equity cheaply, they tend not to do so unless they think they need the money.