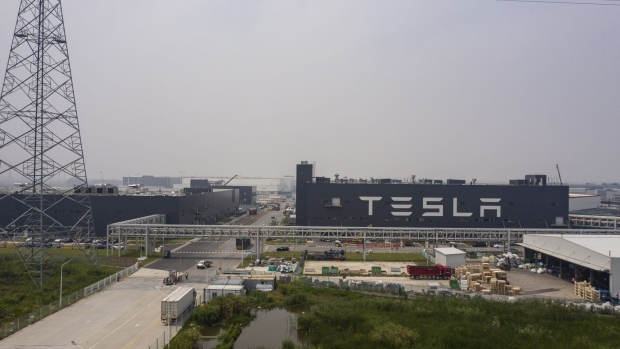 The Tesla Inc. Gigafactory in Shanghai, China, on Wednesday, June 15, 2022. Tesla has staged a remarkable comeback in terms of its production in China, with May output more than tripling despite the electric carmaker only recently getting its Shanghai factory back up to speed after the city’s punishing lockdowns. , Bloomberg

(Bloomberg) -- Tesla Inc. is taking steps to ramp up output at its factory in Shanghai, partly suspending manufacturing capabilities at various points through early August to upgrade production lines, according to people familiar with the matter.

The US-based electric carmaker plans to double its original planned annual target to 1 million cars, said the people, asking not to be identified because the details are private. It will halt most production on its Model Y assembly line for the first two weeks of July while an upgrade is underway, one of the people said, while another person said Tesla will make similar tweaks to its Model 3 production line for a 20-day period starting July 18.

Upgrade work at the factory south of Shanghai is expected to be complete by around Aug. 7, with output of the Model Y SUV then increased to 14,000 units a week, from about 11,000 pre-pandemic, and production of the Model 3 sedan at 7,700 units a week from 5,500 previously, the people said.

With the upgraded production facilities and an expanded workforce on production lines, Tesla will be able to make more than 1 million EVs a year in China, the people said. The original installed capacity of the carmaker’s Shanghai plant was 450,000 units, according to its 2020 annual report.

Representatives for Tesla in China didn’t immediately respond to requests for comment.

Tesla went to extraordinary lengths to keep its China factory up and running during Shanghai’s months-long lockdown, subjecting thousands of workers to a so-called closed-loop system whereby they slept on site to maintain partial production after the plant was shut entirely for around three weeks through mid-April.

Tesla shipped 484,130 cars from Shanghai in 2021, accounting for about 52% of the automaker’s 930,422 global deliveries. Tesla is aiming to increase global sales by more than 50% in 2022, Chief Executive Officer Elon Musk said on an earnings call in January.

The company has staged a remarkable comeback after Shanghai’s Covid-19 lockdown, with May output more than tripling from the month prior at 33,544 cars.

“There’s just a lot of super talented, hard working people in China that strongly believe in manufacturing and they won’t just be burning the midnight oil, they’ll be burning the 3 a.m. oil,” Musk said in May. “They won’t even leave the factory, type of thing, whereas in America, people are trying to avoid going to work at all.”

He praised the work of Chinese firms in an interview with Bloomberg News Editor-in-Chief John Micklethwait this week, saying they’re “extremely competitive, hard-working and smart.”

Tesla’s Shanghai factory will also halt production entirely from July 1 through July 4 due to an electricity cut related to the upgrade, according to an internal memo seen by Bloomberg.