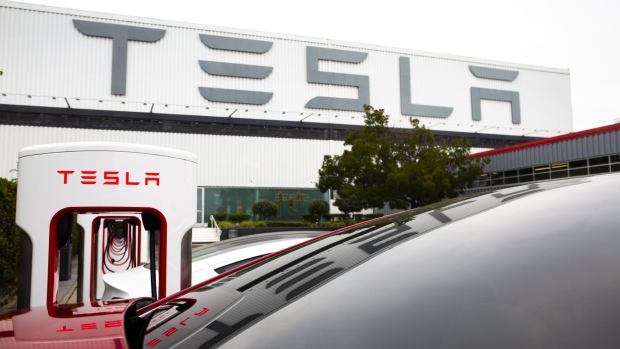 Tesla Inc. says hedge fund Cable Car Capital LLC, which is shorting the company’s stock, is funding a former employee’s allegations that the company smeared him by accusing him of sabotage and stealing sensitive information.

The carmaker said in a filing Monday that Martin Tripp’s 2018 counterclaim against Tesla was being funded by Cable Car, even though Tripp has said under oath that he had no financing or connection to Tesla short sellers.

“Tripp has no excuse,” Tesla said. “He is fully aware of his confidentiality obligations and is openly flouting them. And he has a ready source to pay any monetary sanctions, as his bogus defamation counterclaim against Tesla is being funded by a hedge fund, Cable Car Capital LLC, which is also a short seller of Tesla stock.”

Cable Car portfolio manager Jacob Ma-Weaver, in a statement Wednesday, said it was “deeply disappointing” that Tripp “has chosen, against advice of counsel, to publicize confidential information including his funding arrangements.”

Ma-Weaver said Funicular Fund LP, an investment partnership managed by Cable Car, provided “non-recourse financial support for Tripp’s defense and counterclaims,” but only “after learning of Tesla’s lawsuit in the media.” He said the litigation “is unrelated and immaterial to the fund’s investments in Tesla securities, which include short exposure and a long position in convertible debentures.”

Tesla has sued Tripp, a onetime technician at a Nevada factory, for allegedly stealing company trade secrets after he was denied a promotion. Tripp, in turn, filed his own suit accusing Tesla Chief Executive Officer Elon Musk of smearing him. Much of the fight has been waged through Twitter and strategic media leaks.

According to Tesla, Tripp on Aug. 7 posted a link on Twitter to a public Google Drive folder that housed “voluminous” material related to the lawsuit, and he shared videos on YouTube discussing the case and Tesla secrets. The disclosures included confidential records produced by Tesla, transcripts and mediation documents.

Tripp initially said he wouldn’t remove the information posted. On Aug. 8, he removed the link to the Google Drive folder, but by then the material had been shared and saved by others, Tesla said.

“We’re obviously horrified and disappointed about what has happened,” Fischbach said Tuesday at a hearing by phone on Tesla’s emergency request.

Tripp is parting ways with his lawyers and intends to represent himself, Fischbach said.

U.S. Magistrate Judge Carla Baldwin ordered Tripp to stop disseminating and discussing confidential information from the lawsuit, including re-tweeting other people’s postings that contain the confidential documents. She also ordered Tripp to not contact Tesla’s lawyers directly as long as he’s still represented by his own attorneys.

In addition, the judge scheduled a hearing on whether Tripp should be held in contempt of court for violating the order to keep information confidential and what sanctions he might face if so. Those sanctions could include dismissing his claim against Tesla and rendering a default judgment against him, Baldwin said.

Shorting a stock is selling borrowed shares, buying them back once they’ve fallen and pocketing the difference.