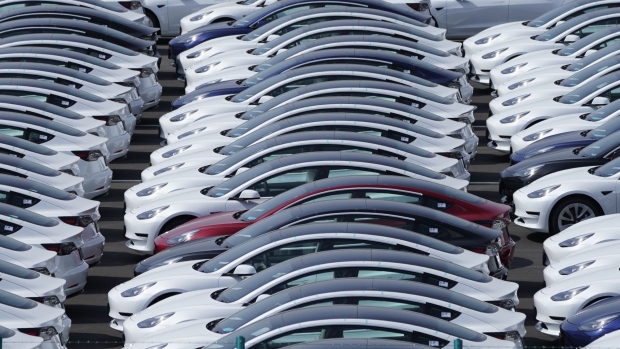 Tesla Inc. vehicles in a parking lot after arriving at a port in Yokohama, Japan, on Monday, May 10, 2021. Tesla sold a record of almost 185,000 vehicles in the first three months of the year despite having issues rolling out new versions of the Model S and X. Photographer: Toru Hanai/Bloomberg , Bloomberg

(Bloomberg) -- Tesla Inc. has sought lower taxes on import of electric vehicles in India, people with the knowledge of the matter said, as it looks to commence operations in Asia’s third-largest economy.

The California-based maker of electric vehicles has written to the transport and industry ministries for reducing import duty on electric cars to 40% from the current range of 60%-100% for vehicles depending on their import value, the people said, declining to be identified as the matter is not public. Earlier, Reuters reported that Tesla has pitched to Indian ministries to reduce federal taxes on imports of fully assembled electric cars.

The high import levy will deter sales, the company said in the letter dated July 5 seen by Bloomberg News. Any reduction will boost the development of the Indian EV ecosystem, Tesla said.

Tesla is seeking to enter India, one of the world’s biggest emerging car markets, where electric vehicles account for less than 1% of new passenger vehicles and two-wheeler sales compared with 5% in China. Even though the government has committed support in form of subsidies to promote EVs in the country, sparse charging infrastructure and high cost has meant low acceptance unlike China where Tesla set up its first factory outside of the U.S. and now dominates electric-car sales.

Earlier this month, transport minister Nitin Gadkari had said Tesla would soon enter the Indian market and the government was already working on building electric charging stations along some highways.

The company has said the reduction in duty will help it make significant direct investments in sales, service, and charging infrastructure. The company plans to significantly increase procurement from India for its global operations and will evaluate broader investment in manufacturing and research and development following a successful launch, the company said in the letter.