There was a sense among Wall Street types a year ago that Tesla Inc.’s entrance into the S&P 500 Index would calm the stock. Sure, it would still have sporadic moments of Elon Musk-driven swings -- up 5 per cent Tuesday, down 5 per cent Wednesday -- but overall, it would behave more like a proper, staid member of the blue-blooded community it was joining.

In the 12 months since it was added to the index, Tesla’s stock has been every bit as volatile as it was in 2018 and 2019. (The start of the pandemic, and the wild swings it sparked, makes comparisons to 2020 meaningless.)

On a typical day, the electric-vehicle maker’s price swings are more than four times greater those of the S&P 500. This is remarkable for a company that is the fifth-most valuable stock in the index. Its peers of large size -- the Nvdias, the Meta Platforms, the Berkshire Hathaways -- are markedly less, not more, volatile than Tesla.

All of which has given the S&P 500 a little taste of the meme fever that has become to represent the stock mania that swept through the country this past year.

“When companies get bigger, we tend to think of volatility as declining, since bigger means more stable. But that hasn’t happened with Tesla,” said Nicholas Colas, co-founder of DataTrek Research, who compared the company’s gyrations to those of Bitcoin. “Tesla, Bitcoin - they are still call options on a given future” that has yet to arrive, contributing to fluctuations. 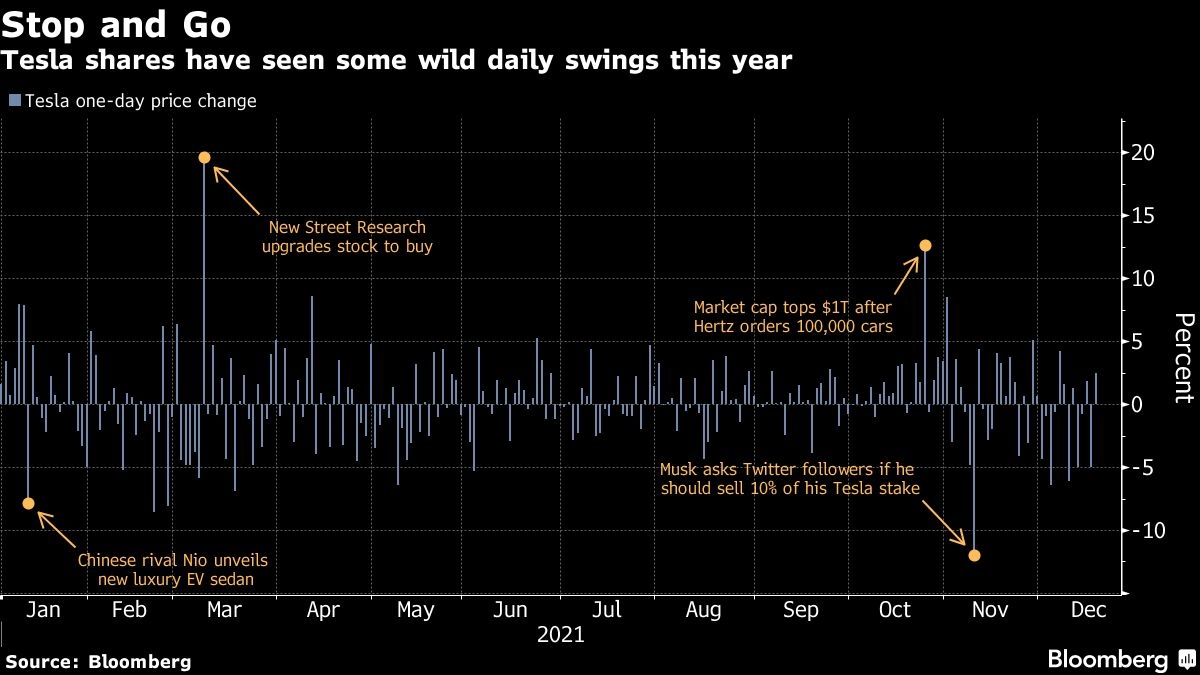 Along the way, Tesla has handed investors a 29 per cent return through Monday, beating the index by 6 percentage points over the past 12 months. The shares were up 1.3 per cent at 9:50 a.m. Tuesday after a steep drop on Monday.

There’s little consensus on whether that outperformance will continue in 2022 -- the company faces lots of challenges and its valuation is sky-high -- but there’s one thing nearly all seem to agree on now: The volatility is here to stay.

“We increasingly live in a trader’s world as opposed to an investor’s world, and Tesla is a poster-child of that,” said David Trainer, founder of New Constructs research firm.

Retail investors’ devotion to Tesla predates the company’s arrival to the S&P 500, with thousands of early backers committing their savings accounts to Musk’s vision of an all-electric vehicle world.

Excitement around the stock is on display across social media platforms and chatrooms daily. Musk himself turned to Twitter on Nov. 6 before embarking on a share selling spree to ask users whether he should offload part of his stake in the car maker. The response? “Yes”.

Tesla’s spokesperson didn’t return a request for comment about volatility in the company’s shares. 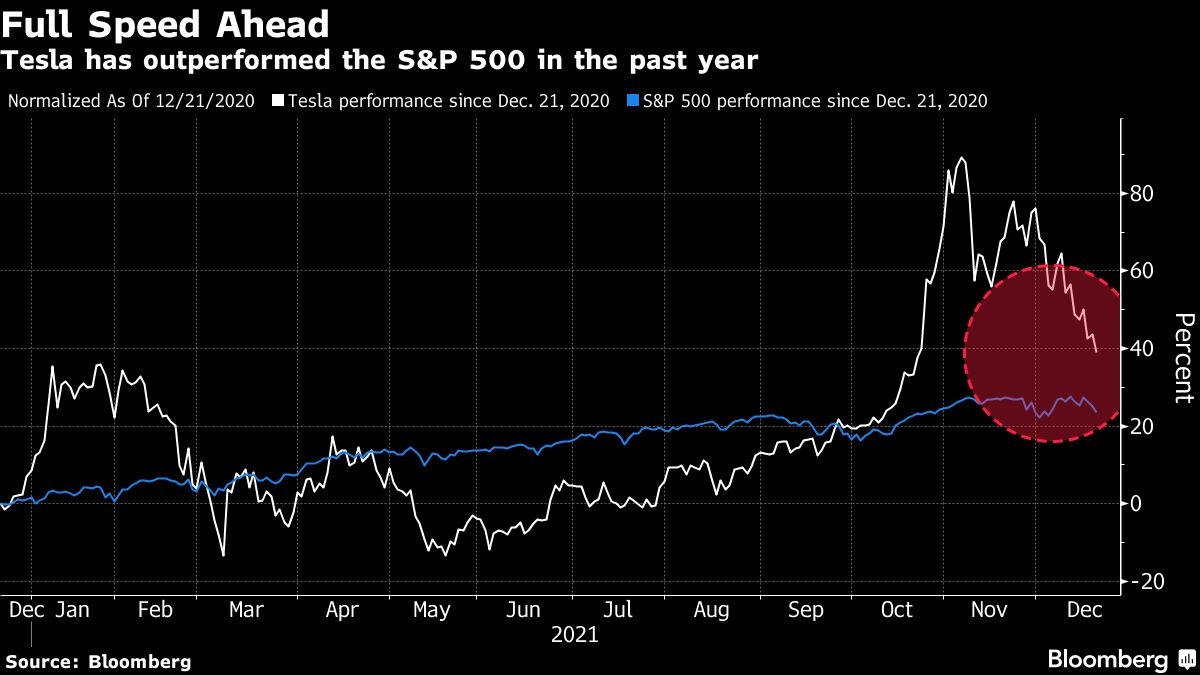 While Musk’s zaniness is often embraced by the retail crowd, such unpredictable moves are new for institutional managers and investors that buy blue-chip stocks. Still, some analysts see an upshot to the persistent volatility of Tesla, currently the fifth-biggest stock in the S&P and the world’s biggest automaker by market capitalization.

Its inclusion in the index led to more “open-mindedness” among traders about volatile stocks that offer faster growth and strong returns, said Matt Weller, global head of market research at Forex.com.

INDEX OF THE FUTURE

Analysts expect the volatility in Tesla to continue. After all, a gauge of expected one-month volatility in the electric-vehicle maker hovers in the 83rd percentile of its readings going back a decade ago.

While there are varying views on Wall Street as to whether shares are a buy, hold or sell, on average analysts expect the stock to be at US$845 12 months from now, a 6 per cent decline from its Monday close.

Tesla posted its ninth straight quarter of profits in the three months through September, solidifying the stock’s rally and propelling it to new highs. The share advance has also left some sell-side analysts wondering if the rally left the shares overvalued.

But retail investors, who have shown an appetite for risk and a capacity to weather swings in valuation, are likely to extend their links to the company and its stock -- regardless of what the Wall Street establishment thinks.

“At the end of the day, having stocks that move in different ways in response to different catalysts is really what brings the diversity that indexes seek to offer,” Forex.com’s Weller said. “Indexes of the future won’t just consist exclusively of the old-school, conservative CEOs.”