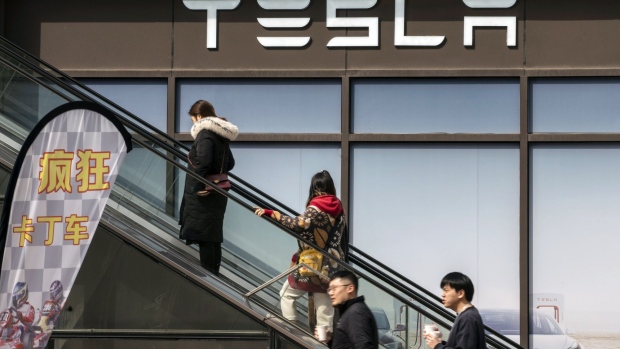 Shoppers ride an escalator in front of the Tesla Inc. showroom at the Chamtime Plaza in Shanghai, China, on Monday, March 8, 2021. China's electric-car makers are paying top-dollar rents to open showrooms in luxury malls, as they seek to gain an edge in the hyper-competitive market. Photographer: Qilai Shen/Bloomberg , Bloomberg

(Bloomberg) -- Tesla Inc. has set up a new research and development center in Shanghai as it continues to expand its presence in the Chinese market.

The new R&D center -- the electric carmaker’s first overseas -- will help the company “bring products and services that are more in line with the needs of the Chinese consumer,” Tesla said in a statement.

The carmaker also announced it had completed a data center in Shanghai and that both will be put into operation in the near future. Tesla didn’t say how much the centers cost.

Tesla continues to invest in the world’s biggest autos market despite U.S. tensions with China. The nation is already the world’s largest venue for electric vehicles and sales are expected to surge to 6.2 million vehicles by 2025, when they will account for a quarter of all passenger car sales in the country, according to BloombergNEF.