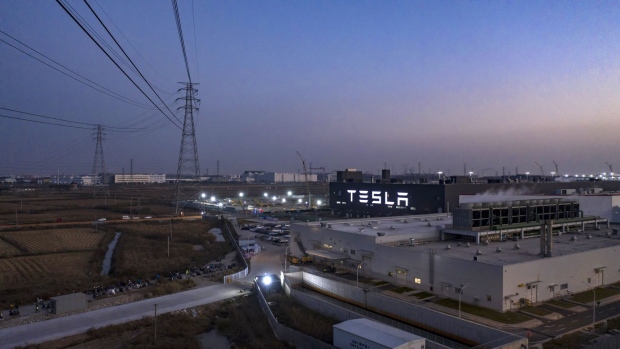 The Tesla Gigafactory in Shanghai. , Bloomberg

(Bloomberg) -- Tesla Inc. may restart production at its Shanghai factory as soon as late afternoon Monday and has laid out stringent measures for staff operating in the so-called closed-loop system, according to people familiar with the matter.

The electric-vehicle maker will provide each worker with a sleeping bag and mattress, a memo sent to employees and viewed by Bloomberg shows. Given there isn’t any purpose-built dorm, people will be required to sleep on the floor in a designated area and there will be other spaces allocated for showering, entertainment (both yet-to-be completed) and catering, the memo shows.

All employees will have to take a nucleic acid test daily for the first three days, have their temperature checked twice a day and wash their hands four times a day, twice in the morning and twice again in the afternoon, the memo shows. Workers will be provided with three meals and be given an allowance of about 400 yuan ($63) a day, although the actual amount will depend on a person’s position and level, one of the people said.

Officials in Shanghai have been encouraging companies to restart production that was halted due to the city’s strict lockdown by using closed-loop systems in which workers live on site at their factories. So far, more than 600 firms have restarted operations, including Quanta Computer Inc., which makes laptops for Apple Inc.

Tesla told some employees on Friday to prepare to enter a closed-loop system on April 17 after a weeks-long suspension as Shanghai attempted to contain the Covid outbreak. To bypass current restrictions on residential compounds in the city, the company issued a special certificate for those on call and arranged shuttle buses to bring them back to the plant.

Only staff residing in the lowest risk residential compounds and those who have completed a two-shot vaccination regime will be allowed to re-enter, joining the some 400 staff already on site due to pandemic prevention and emergency measures, according to the memo.

The last closed-loop workers entered the factory just after midnight and are expected to work in the system through May 1, although that may change in accordance with the city’s pandemic prevention policies, the memo said.

Prior to the pandemic-inducted halt on March 28, Tesla workers in Shanghai were working three shifts covering 24 hours, seven days a week. Factory staff would work four days on and then have two days off. Now, they’re being asked to work 12 hours a day, six days straight with one day off, people familiar with the matter said.

The company’s Shanghai plant was producing about 2,100 cars a day, churning out 182,174 vehicles in the first quarter. Ramping production back up from such a long shutdown won’t be an instant process, however.

Tesla only has inventory for just over two weeks based on its new closed-loop schedule, another person familiar with the matter said, and logistics are a major problem for many other parts.