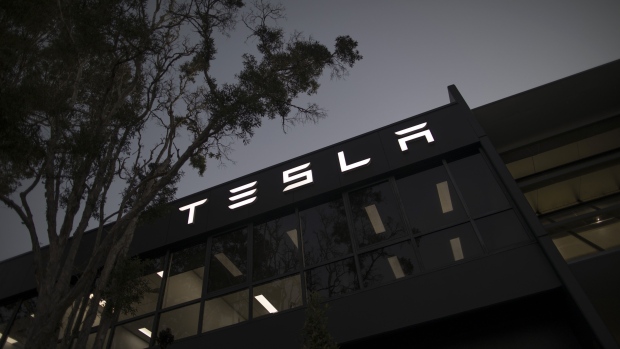 Signage at a Tesla Inc. showroom and service center in Sydney, Australia, on Monday, April 12, 2021. Tesla and the electric-car industry generally thrive in the world’s richest nations. Not so in Australia, where even tractors outsell EVs two to one. , Bloomberg

(Bloomberg) -- Tesla Inc. tumbled after news that Chief Executive Officer Elon Musk proposed to buy Twitter Inc. at the original offer price, raising the possibility that he will sell more of the electric-car maker’s stock.

Musk unloaded billions of dollars in Tesla shares over the summer to accumulate the cash needed to fund his portion of the deal. He subsequently attempted to back out, prompting legal action by Twitter, before offering to continue with the original transaction, Bloomberg reported Tuesday.

It wasn’t immediately clear if Musk will need to sell additional Tesla shares to finance the deal. The billionaire didn’t respond to a request for comment.

Tesla’s shares pared gains of as much as 6.2%, briefly turning negative before rebounding slightly. They were trading up 2% at 1:55 p.m. in New York. Twitter rose as much as 18% before trading was halted.

If Musk succeeds in buying the social-media giant, it raises the prospect that Tesla’s leader, who already oversees companies including SpaceX, would be spread even more thinly as the automaker attempts to ramp production globally and fend off competition in the EV market. Tesla, which has just three named executive officers, fell the most in the S&P 500 Index on Monday after reporting disappointing quarterly deliveries.