Tesla Inc. eked out a small gain after slumping 14 per cent in the previous six trading sessions and slipping briefly into oversold territory.

Last week’s 12 per cent drop was the worst since February and, together with Monday’s 2.2 per cent decline, brought shares down more than one-third from their Jan. 26 record high.

Tesla rose as much as 3.4 per cent Tuesday in New York, before closing up 0.2 per cent at US$577.87. The S&P 500 Index closed down 0.9 per cent. The stock had fallen below its long-term average price, or the 200-day moving average, on Thursday last week and also Monday.

According to the 14-day relative strength index, which tracks the persistence and magnitude of price swings, Tesla’s shares briefly touched the oversold level and bounced back sharply. The stock currently has a score of 36.5 on the index, and a number below 30 is considered oversold.

“The overall market has started to rotate back into growth names, which has helped Tesla find at least a short-term bottom for now,” said Jake Wujastyk, chief market analyst at technical analysis firm TrendSpider. The firm’s monthly seasonality tool shows that 80 per cent of the time, Tesla shares close higher in June compared to May, possibly suggesting some bullishness into the beginning of summer, the analyst added. 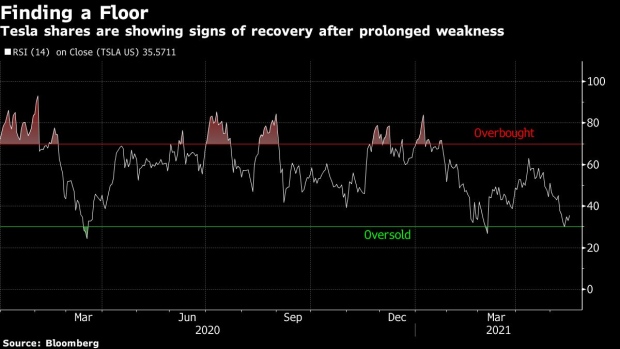 Earlier on Tuesday, news of two crashes in China and Washington State initially sent shares down by as much as 2.3 per cent. And electric vehicle news site Electrek said Tesla has over 10,000 cars in its Fremont factory that have come off the assembly line with a “containment hold,” which means they cannot be delivered to customers.

Tesla has languished despite strong first-quarter results as investors turned their focus to increased competition in the EV market from global automakers, as well as semiconductor shortages.