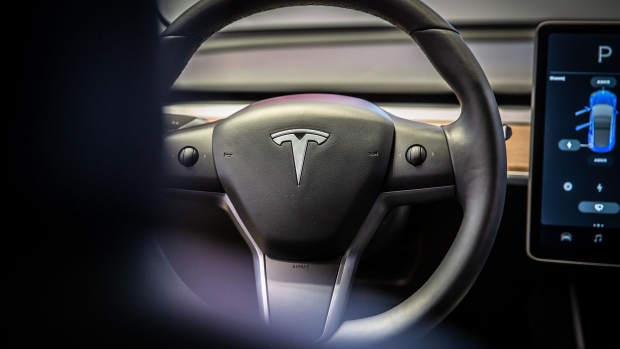 A sits on the steering wheel of a Tesla Inc. Model 3 electric vehicle in the Tesla store in Barcelona, Spain, on Thursday, July 11, 2019. Tesla is poised to increase production at its California car plant and is back in hiring mode, according to an internal email sent days after the company wrapped up a record quarter of deliveries. Photographer: Angel Garcia/Bloomberg , Bloomberg

Tesla Inc. was sued over a Maryland highway crash last year in which a Model 3’s airbags failed to deploy, leaving a college professor with brain damage.

Elon Musk, the company’s co-founder, has touted the Model 3 as the “safest car ever built” with the lowest risk of injury of any vehicle tested by government regulators. The lawyers who filed the suit said they believe it’s the first case targeting the safety of electric-car maker’s airbags.

Tesla “tested, manufactured, marketed, distributed, and/or sold the subject Model 3, placing the product into the stream of commerce in a defective and unreasonably dangerous condition,” attorneys for Kristian Edwards and her husband said in the 27-page complaint. The case couldn’t immediately be verified in electronic records for California Superior Court in Oakland.

Tesla didn’t respond to multiple emails seeking comment.Alleged defects in Tesla’s Autopilot system have been blamed in several lawsuits for deaths and injuries and the company has faced scrutiny of the technology by federal safety regulators.

Separately, the National Highway Traffic Safety Administration is investigating premature failures of the large central touchscreen and the computer that powers it in Tesla’s Model S sedans.

The Edwards family’s Model 3 was struck by another vehicle in July, causing it slam into a guardrail on the I-95 interstate highway, according to the suit.

None of the car’s airbags deployed and Edwards, a public-health professor at George Washington University in Washington who was wearing her seat belt, suffered major head trauma and other injuries. Her son in the back also was hurt, according to the suit.

The family is seeking compensation for medical bills, Edwards’ lost earning capacity and her pain and suffering tied to the accident, according to the suit.The case is Edwards v. Tesla Inc., California Superior Court, Alameda County (Oakland).