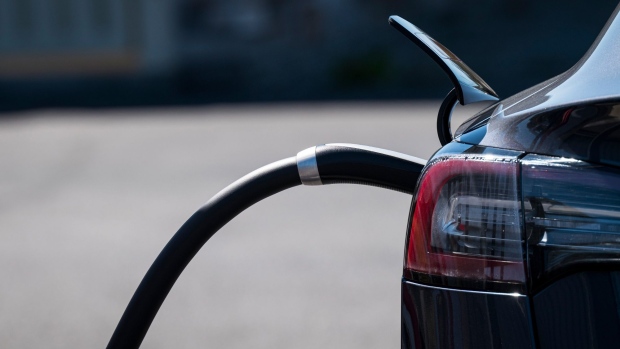 A Tesla Inc. vehicle charging at a Tesla Supercharger station in Petaluma, California, U.S., on Thursday, Sept. 24, 2020. California will phase out sales of new, gasoline-powered cars by 2035 as part of its fight against climate change, Governor Gavin Newsom announced -- the first state to set an expiration date for the traditional automobile. , Bloomberg

(Bloomberg) -- A Tesla driver claims the company broke a promise to provide free charging of the electric vehicle for life by imposing a fee on people who leave their car at the charging station too long.

Kevin Shenkman sued Tesla Inc. in California state court and is seeking to represent all early Tesla adopters to recover their costs, as well as punitive damages and an order stopping Tesla from imposing the fees.

To convince early customers to buy Tesla’s electric vehicles, the company promised them free Supercharging for life. But to deal with congestion at the Supercharging stations, Tesla imposed a “Supercharger fee” on customers who didn’t return to their vehicles almost immediately after they had been charged, Shenkman said in the complaint filed in state court in Alameda County.

“To compound the matter, when a customer, such as plaintiff, who has been promised free Supercharging for life, refuses to pay such ‘Supercharger fees,’ Tesla cuts off Supercharging access entirely, thus disabling a feature for which customers paid thousands of dollars extra to obtain,” Shenkman said.

Tesla started charging for the use of its Supercharger network in 2017, but those who had bought vehicles from 2012 to 2016 were exempt.

Tesla didn’t respond to a request for comment, made after regular business hours Thursday.