Tesla Inc. joined an elite group of companies with market values of at least US$1 trillion on Monday, a key milestone for the Elon Musk-led carmaker whose shares have been on a tear amid a global shift to electric vehicles.

The maker of the Model 3 sedan -- the top-selling electric car worldwide -- is now the second fastest company ever to reach this mark, taking just over 11 years since its public debut in June 2010. Facebook Inc. did it faster, although its market capitalization is now below US$1 trillion as the stock has sold off over the past two months. The other U.S.-listed members of the trillion-dollar club include Apple Inc., Microsoft Corp., Alphabet Inc. and Amazon.com Inc. 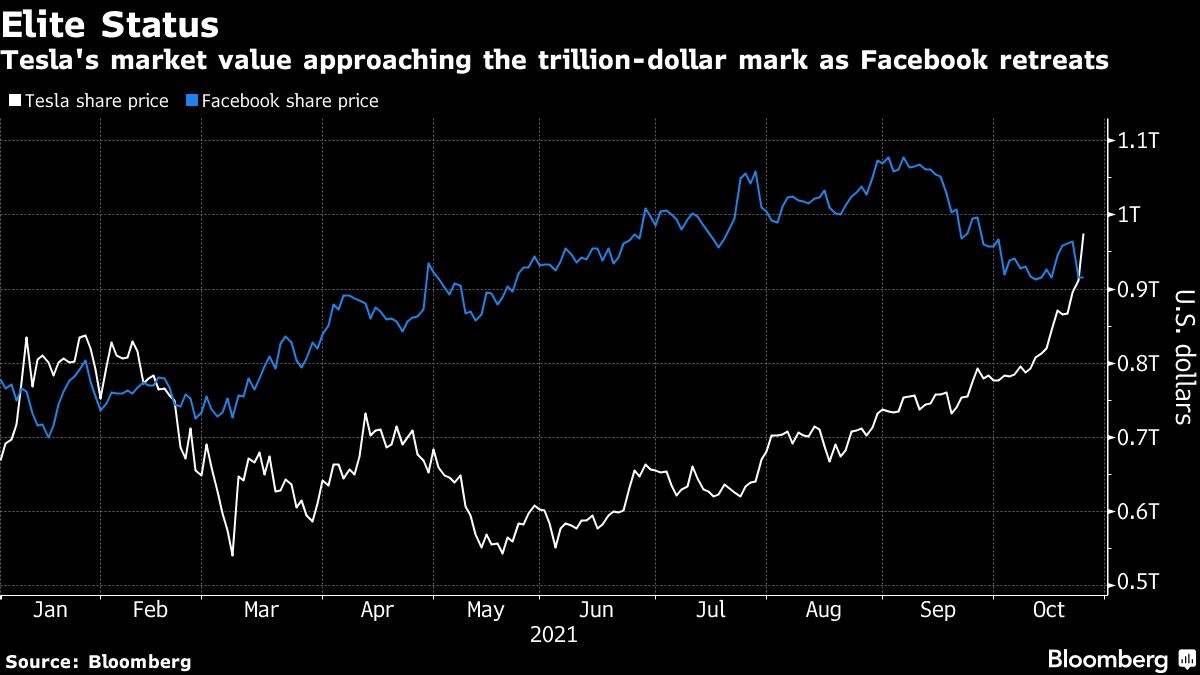 Tesla’s stock closed up 13 per cent, its biggest one-day move since March 9, at a fresh record of US$1,024.86. This took its market capitalization comfortably above US$1 trillion, based on about a billion shares outstanding as of Oct. 21.

“Tesla shares have a tendency to be quite volatile and driven by a wide range of market forces that are difficult to comprehend,” Morgan Stanley analyst Adam Jonas wrote in a note. While the analyst believes Tesla shares are worth US$1,200, Jonas doesn’t have any expectation that the shares will trade up to such a level in the near term, the analyst noted.

Tesla’s addition to the coterie of megacap technology names comes as the automotive industry is on the cusp of a massive transformation, with electric vehicles expected to take the place of gas-driven cars globally. The company and its charismatic and often controversial co-founder and Chief Executive Officer Elon Musk are seen as one of the main driving forces behind this shift.

Musk’s wealth has also skyrocketed alongside the latest climb in the company’s stock price. The billionaire co-founder is now the richest man in the world, with a net worth of about US$281 billion. Musk is also the biggest shareholder of Tesla, with a nearly 17 per cent stake, according to Bloomberg data. 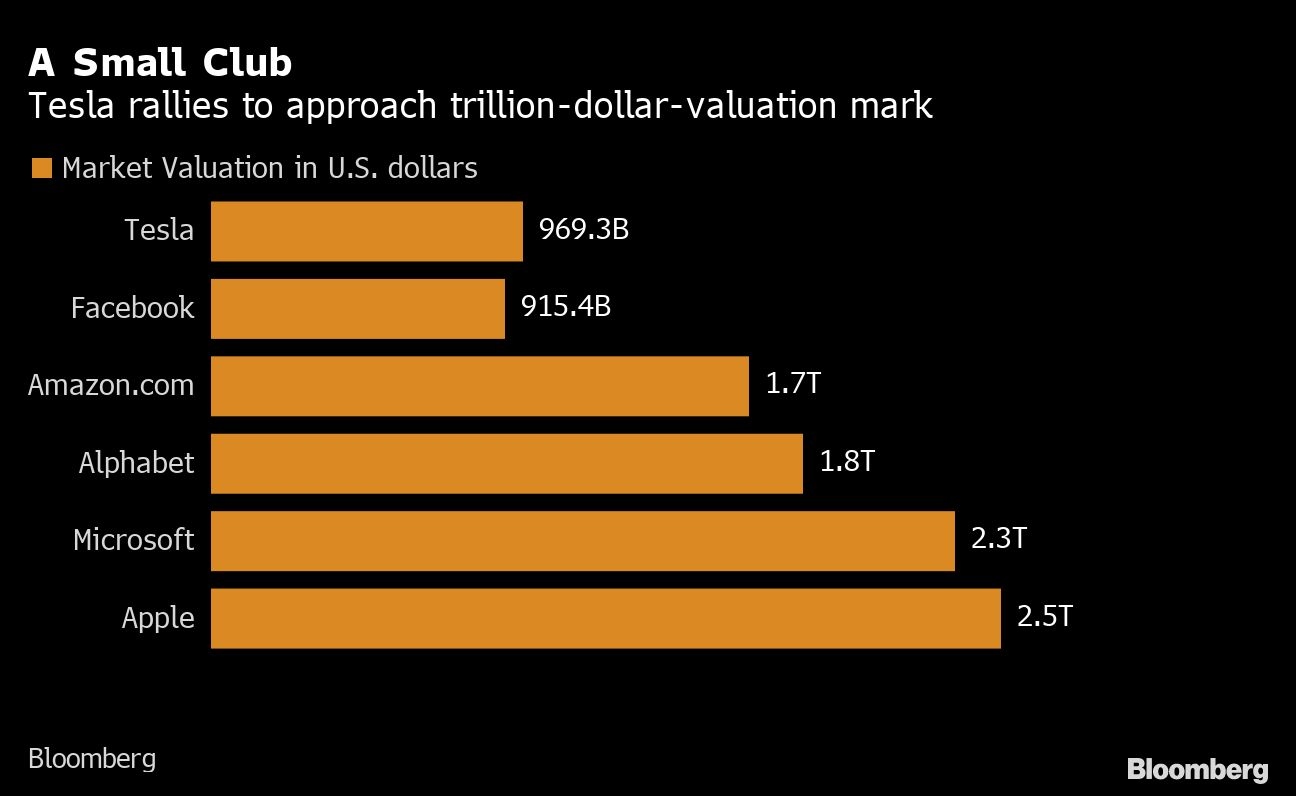 The company’s shares have been on a streak over the past five months, climbing more than 80 per cent since mid-May. However, the rally got a big boost this month amid a flurry of encouraging headlines: strong third-quarter earnings and deliveries, a big order from car-rental giant Hertz Global Holdings Inc., and a report that the company’s Model 3 was the top-selling vehicle in Europe last month.

“Tesla is the leader in EV manufacturing, batteries and autonomy,” Morgan Stanley’ Jonas wrote on Monday. “Tesla also has a suite of enabling technologies and other businesses that would allow the company to be an auto and energy champion in the long run.”

The push toward electrifying all modes of transportation -- especially cars, trucks, buses and vans -- has rapidly intensified this year, with governments pledging to find solutions for the climate-change crisis. Countries across the world have announced policies to lower carbon emissions and incentivize corporations to move toward greener technologies. The entire electric-vehicle ecosystem -- including carmakers, battery developers and charging-network operators -- has been climbing as a result.

Yet, some say those bright and shiny growth numbers still do not fully justify Tesla’s mammoth size. It is not only the biggest automaker in the world, its market capitalization is significantly bigger than all of the top car companies taken together. However, Tesla still manufactures only a fraction of the number of cars that some of these companies, like General Motors Co., produce.

“We acknowledge Tesla is executing impeccably, but this does not alter our view Tesla is egregiously overvalued,” Roth Capital Partners analyst Craig Irwin wrote in a note on Oct. 21, saying that the company’s current valuation appears to rest on the “specious assumption that the hundreds of EVs slated for launch by 2025 will all be flops.”

Competition is indeed building up. After being on the sidelines for years, with mostly hybrid or just a few electric cars in their lineup, almost all major legacy auto companies this year have announced aggressive plans for making EVs and developing the required ecosystem that includes batteries and charging-station networks.

Bullish investors and analysts, on the other hand, say Tesla should not be compared to its auto peers at all. It is more like a technology company, they argue, and is correctly valued accordingly.