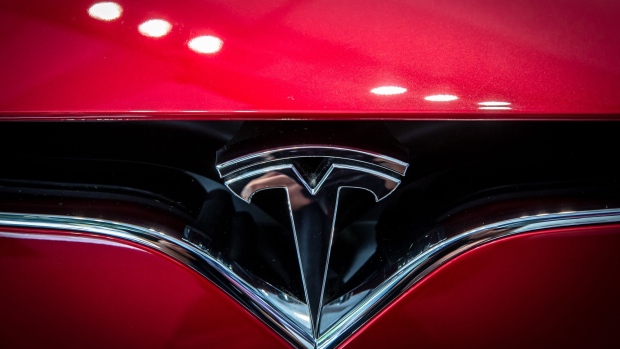 A badge sits on the hood of a Model S electric vehicle displayed inside a Tesla Inc. store in Barcelona, Spain, on Thursday, July 11, 2019. Tesla is poised to increase production at its California car plant and is back in hiring mode, according to an internal email sent days after the company wrapped up a record quarter of deliveries. , Bloomberg

(Bloomberg) -- Tesla Inc. agreed to buy batteries from South Korea’s LG Chem Ltd. to be used in electric vehicles produced out in China, according to people familiar with the matter.

Batteries made by LG Chem will be used initially in Model 3 cars manufactured in the plant near Shanghai, Tesla’s first outside of the U.S, said the people, asking not to be identified discussing a private matter. LG Chem batteries will also be used in Model Ys produced there once the compact crossover car is released, they said. Shares of LG Chem jumped.

The supply agreement isn’t exclusive to LG Chem, the people said, meaning Tesla could procure batteries from other suppliers as the Model 3 maker prepares to start production in China later this year, part of the EV pioneer’s push into what is the world’s biggest market for new-energy vehicles.

Tesla plans to use multiple battery suppliers for its China-made cars, the people said, and has also been in talks with top Chinese battery producer Contemporary Amperex Technology Co. Ltd. about a supply deal, Bloomberg reported in March. Tesla has a long-standing relationship with Japan’s Panasonic Corp., which makes batteries with the carmaker in Nevada.

Securing battery supply is a key step in Chief Executive Officer Elon Musk’s plan to expand in China, an increasingly important market for the loss-making company as incentives for EVs in the U.S. wane. While Tesla has a strong following in China, local rivals have a head start thanks to significant support for the sector from Beijing. Imported vehicles are made costlier by tariffs, while locally built EVs enjoy government incentives.

For Seoul-based LG Chem, winning an order from a high-profile customer like Tesla bolsters its profile as one of the world’s emerging battery-making powerhouses.

A spokesman for LG Chem said the company doesn’t comment on issues related to customers. Representatives for Tesla in China didn’t respond to multiple requests for comment. A CATL representative declined to comment.

Talks with CATL are continuing, but are taking time as the two sides discuss technical specifications, according to the people. LG Chem was more flexible in meeting Tesla’s technology requirements, one of the people said.

LG Chem will provide Tesla with so-called 21700 type battery cells, which have more capacity than some older battery types, one of the people said. They will be made at LG Chem’s factory in Nanjing, which is about 200 miles (320 kilometers) west of Shanghai.

A unit of South Korea’s fourth-largest conglomerate, LG Chem is the world’s second-biggest manufacturer of lithium-ion battery cells, according to BloombergNEF. The company is seeking to reduce its reliance on chemical production by boosting sales of electric-vehicle batteries. It has supply deals with Volvo Cars to Renault SA and General Motors Co.

Tesla broke ground on the factory outside Shanghai on Jan. 7, after years of negotiations with Chinese authorities to become the first foreign automaker to wholly own a manufacturing facility in the country. Tesla plans to start producing cars at the factory by the end of 2019.

But Tesla is doubling down on China at an uncertain time for the company and the country.

Though electric-vehicle sales are rising in China, growth is being held back by the government’s move to phase out subsidies on EV purchases. China’s overall auto market is suffering a historic slump, with the industry’s total sales in decline for more than a year.

Tesla is also up against stiff competition. BYD Co., an EV giant backed by Warren Buffett’s Berkshire Hathaway Inc., and other domestic contenders such as upstart NIO Inc. are winning users with their locally-built cars, and premium rivals such as BMW AG and Daimler AG are starting to bring their electric models to the market.

--With assistance from Chunying Zhang, Sohee Kim and Tian Ying.

To contact Bloomberg News staff for this story: Haze Fan in Beijing at hfan40@bloomberg.net