Tesla Inc. is set to “attack and conquer” another trillion-dollar market as the company best known for its electric vehicles ramps up its focus on energy generation and storage, according to Canaccord Genuity.

Analyst Jed Dorsheimer upgraded the stock to buy from hold and gave it one of the highest price targets on the Street, predicting the generation and storage unit could yield US$8 billion of revenue by 2025.

“TSLA is rapidly creating an Apple-esque ecosystem of energy products, harmonized in electrification, to become The Brand in energy storage,” Dorsheimer said in a note to clients Monday. His US$1,071-a-share objective -- up from US$419 previously -- suggests almost 60 per cent upside for a stock that’s already gained nearly six-fold in the past year. 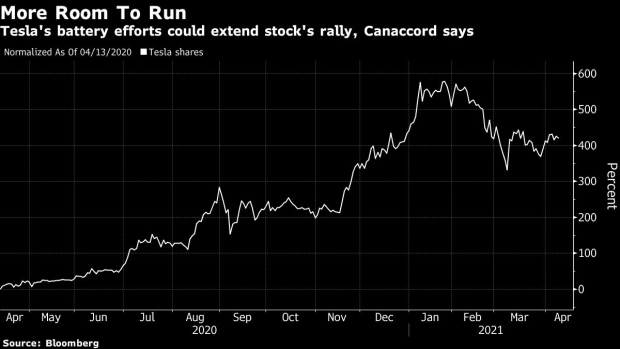 Tesla is tapping all available resources to meet battery demand, including in-house production at its Fremont site, production with partner Panasonic Corp. in Nevada and supply agreements with LG Chem Ltd., the analyst said. As supply constraints ease, the company will be able to meet demand for its Powerwall home storage, often paired with solar installations, he said.

Dorsheimer’s price target values Tesla’s stock and net debt at 63 times his estimate of the company’s earnings in 2024. That’s three times the average multiple of a group of competitors, he said.

“While rich, we also believe Tesla holds a several-year lead and is now expanding aggressively into storage and thus feel our multiple is warranted,” the analyst wrote.

He’s not the biggest bull on the stock: Cathie Wood’s Ark Invest Management expects Tesla to hit US$3,000 by 2025, the firm said last month.