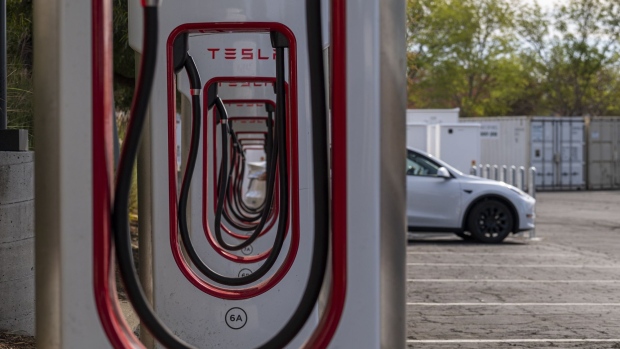 The U.S. carmaker intends to pool the fleet of all-electric vehicles it sells in the EU with vehicles the Tata Motors Ltd.-owned manufacturer delivers to customers, according to a filing on the European Commission’s website. JLR is joining Honda Motor Co., which reached a pooling deal with Tesla roughly a year ago.

A representative for JLR didn’t immediately comment on the filing. The U.K. automaker provisioned 35 million pounds ($48 million) for fines from failing to meet EU rules last year and had previously said it expected to meet its target for carbon-dioxide emissions this year.

Tesla has generated billions in revenue by helping automakers comply with stricter emissions regulations, including about $1.15 billion in the first nine months of this year. The carmaker doesn’t specify how much of the revenue is coming from particular manufacturers or give regional breakdowns.

Stellantis NV, the automaker formed through the merger of PSA Group and Fiat Chrysler, announced in May that it was exiting Tesla’s EU emissions pool. Before the company ended the pooling pact early, one analyst noted that Fiat Chrysler was effectively funding the factory Tesla is building in Germany.