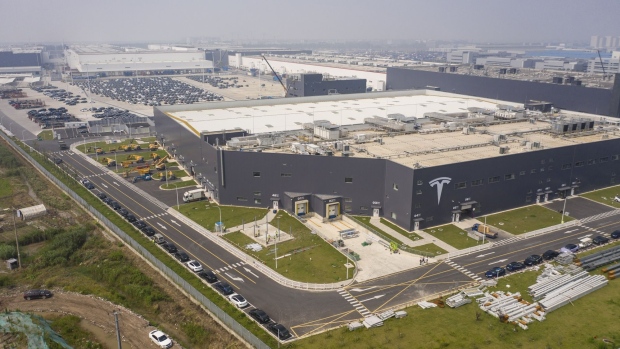 (Bloomberg) -- Tesla Inc. will shorten production shifts at its Shanghai factory as soon as Monday and has delayed the on-boarding of some new hires, people familiar with the situation said — adding to signs demand for the company’s electric cars in China isn’t meeting expectations.

The plant will operate two 9 1/2-hour shifts per day, down from two 11 1/2-hour shifts currently, according to the people, who asked not be named because the information isn’t public. The change is scheduled to take place from Monday, according to a production schedule seen by Bloomberg News, though it may be subject to some last-minute adjustments, the people said. The shorter shifts will lead to reduced monthly pay for production staff, they said.

Earlier this week, Bloomberg reported that Tesla plans to cut production this month at the Shanghai factory across the Model Y and Model 3 production lines by about 20%. A Tesla representative said it was “untrue” the carmaker planned to cut output, without elaborating.

Separately, the on-boarding process of some new hires has been suspended, other people said. Some production staff who were slated to start in November, including in Tesla’s battery workshops and on vehicle assembly lines, were informed by the company their start dates would be delayed. One of the people said they were told by Tesla’s recruiter to be prepared for to start after the Chinese New Year holiday, which falls at the end of January, because there isn’t an urgent need for more workers right now.

A Tesla representative in China declined to comment Thursday.

After enjoying a dream start in China, Elon Musk’s EV pioneer is now facing tougher competition from local electric-car makers in the word’s biggest auto market. Recent price cuts and incentive offers signaled demand isn’t keeping up with increased supply after an upgrade of the factory boosted capacity to around 1 million vehicles a year. On Wednesday, Tesla offered 6,000 yuan ($860) subsidies to customers who buy and take delivery of new cars this month, suggesting it has stock to clear.

China is key for Tesla, and continued growth in the world’s biggest EV market is crucial for achieving Musk’s goal of 50% annual growth globally for years to come.

The pullback in Shanghai comes as Tom Zhu, the longtime Tesla executive who oversaw construction of what was the US company’s first overseas gigafactory, is deployed at the newest plant in Austin, Texas, Bloomberg reported earlier on Thursday. Zhu, who has been heading Tesla’s Asia Pacific operations, is said to be overseeing the ramp up of Giga Texas.

The shorter shifts at the Shanghai factory, as part of the output cut, won’t necessarily be immediately reflected in monthly deliveries because the company still has some inventory on hand, one of the people said. Any Model 3 or Model Y ordered in China today should be delivered within the month, Tesla’s website shows. That lead time is down from as long as four weeks in October and up to 22 weeks earlier this year.

Tesla may need to cut prices in China further in the coming year because it “increasingly appears to have a demand issue,” Sanford C Bernstein & Co. analyst Toni Sacconaghi Jr. said in a note this week.

Tesla shares fell almost 11% over the past three days since Bloomberg News reported the Shanghai production cuts. Musk’s bankers are considering providing the billionaire with new margin loans backed by Tesla stock to replace some of the high-interest debt he layered on Twitter Inc., according to people with knowledge of the matter.

--With assistance from Craig Trudell.