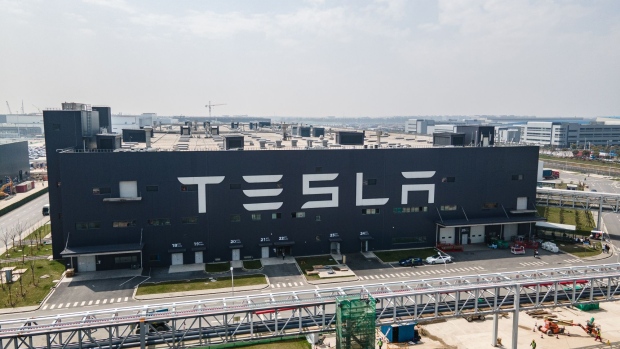 (Bloomberg) -- Tesla Inc. will suspend output in stages at its Shanghai electric car factory from the end of the month until as long as early January, according to people familiar with the matter, amid production line upgrades and slowing consumer demand.

Most workers on both the Model Y and Model 3 assembly lines won’t be required in the last week of December, the people said, asking not to be identified because they’re not authorized to speak publicly. Model Y output disruptions could extend through early January, one of the people said.

Production of the Model 3 sedan may again be suspended during Chinese New Year, which in 2023 falls in late January, to allow for further upgrades and equipment maintenance to cater for the model’s revamped version, another person said.

Tesla representatives in China didn’t immediately respond to a request for comment. Reuters earlier Friday reported that Model Y assembly would be suspended between Dec. 25 and Jan. 1, citing people it didn’t identify.

Tesla’s shares rose 3.3% at 9:45 a.m. in New York, bouncing back after four consecutive days of declines. The stock tumbled 51% this year through Thursday’s close.

Consumer demand for cars in China has been dented by the country’s still strict approach to Covid, which has resulted in snap lockdowns and kept buyers away from showrooms. Retail sales of all passenger vehicles in the nation slipped in November, sinking almost 11% from October, Passenger Car Association data released Thursday showed.

The muted demand comes right after Tesla in August underwent an upgrade of the Shanghai factory to boost capacity to around 1 million vehicles a year. The US EV pioneer also lowered prices and embarked on a marketing blitz. More than 100,000 EVs were shipped from the facility in November, a record, and about 70% of them were Model Y sports utility vehicles.

Now however lead times are shortening drastically, suggesting the company still has inventory on hand. Any Model 3 or Model Y ordered in China today should be delivered within the month, Tesla’s website shows. That lead time is down from as long as four weeks in October and up to 22 weeks earlier this year.

Tesla is also shortening production shifts at the factory as soon as Monday and has delayed the on-boarding of some new hires, other people familiar with the situation said earlier this week — adding to signs demand for the company’s electric cars in China isn’t meeting expectations.

Some production staff who were slated to start in November, including in Tesla’s battery workshops and on vehicle assembly lines, were informed by the company their start dates would be delayed and one of the people said they were told by Tesla’s recruiter to be prepared to start after the Chinese New Year holiday because there isn’t an urgent need for more workers right now.