Tesla Inc. Chief Executive Officer Elon Musk took to the stage late Thursday to reprise a familiar role: pitching a future vehicle to a throng of adoring fans. This time, it was the “Cybertruck” -- his name for Tesla’s new electric pickup.

The angular vehicle, which has a stainless-steel skin, starts at US$39,900 and will come in three variants, Musk told a packed audience in Hawthorne, California. Customers can order the truck with a deposit of just US$100, though production “nears in late 2021,” Tesla said on its website.

After a “Blade Runner”-inspired introduction, Musk had Tesla’s long time chief designer, Franz von Holzhausen, smash the truck’s steel exterior with a sledgehammer, showing that it did not dent.

But it was the second demonstration, of “Tesla armor glass,” that was the real show stopper: von Holzhausen unintentionally shattered two of the truck’s windows with a metallic ball, causing Musk to say “Oh my f---ing god.” Given how product launches are usually scripted and rehearsed, the broken windows were the evening’s big surprise. 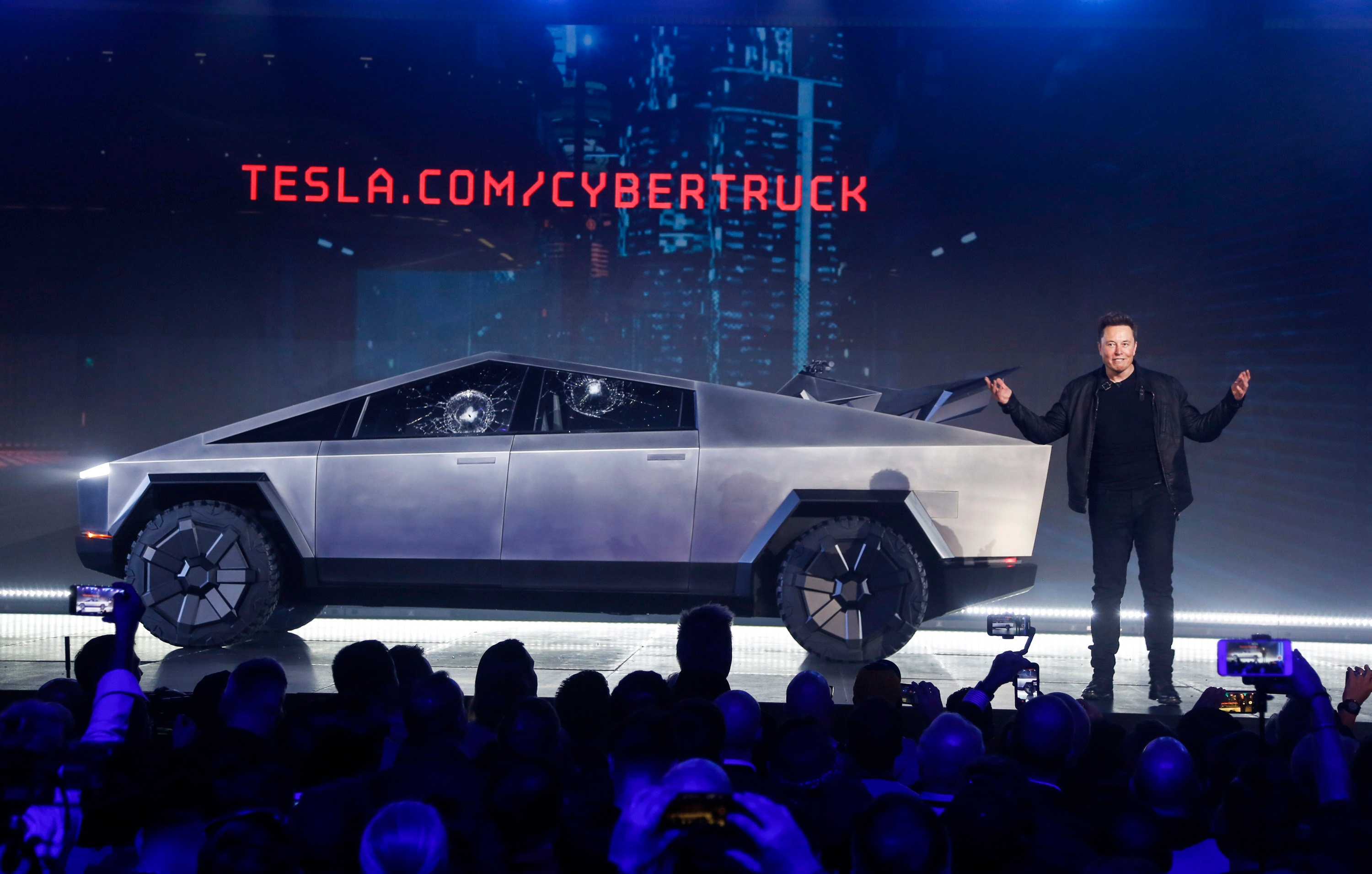 Tesla shares fell as much as 3.2 per cent to US$343.55 pre-market in New York. The stock was up 6.6 per cent this year through Thursday’s close.

The evening began with a slide show of standard pickup trucks throughout the years, and Musk’s vow to make something different that runs on sustainable energy.

“You want a truck that’s really tough, not fake tough,” Musk said, in what seemed to be a veiled swipe at Ford Motor Co.’s slogan. “A truck you can take a sledgehammer to that doesn’t dent.”

Tesla fans in the audience liked what they saw.

“It’s like something out of a movie set,” said Elizabeth Lepek of Marina del Rey, California, a current Tesla Model X owner who placed a $100 deposit for the Cybertruck. “It’s so futuristic. I like the design of it. There’s nothing quite like it on the road.”

But traditional truck buyers are a tougher audience and less likely to be impressed by Silicon Valley sizzle.

“It misses the core truck buyer,” said Gene Munster, a managing partner at venture capital firm Loup Ventures. “A contractor is not going to show up to a work site in this truck. That said, Tesla will still sell some of them.”

The hashtag #cybertruck quickly began trending on Twitter as potential customers started sharing their views about the futuristic design -- and the window snafu.

I don't know about you but I like the #Cybertruck by Tesla. It's super cool and strange. Straight from the future! pic.twitter.com/hReOawX0Da

I swear I drew this in kindergarten. @elonmusk #Cybertruck pic.twitter.com/widS7sm9F2

And though it will take a long time before the Cybertruck hits the streets, that’s something Tesla customers are used to. Musk unveiled a Semi truck two years ago, but that vehicle has yet to enter volume production.

The lucrative full-size pickup market in the U.S. is dominated by the Detroit 3: Ford Motor Co.’s F-150, Fiat Chrysler Automobiles NV’s Ram 1500 and General Motors Co.’s Chevy Silverado. Japanese automakers have spent two decades and billions of dollars to get in on the gravy train, but U.S. brands still control almost 92% of the half-ton segment, according to IHS Markit.

“The design will be questioned, but over time the specs will help win over pickup loyalists,” said analyst Ben Kallo of Robert W. Baird. “But the volumes are expected to be low, and the Model 3 and Model Y continue to be the focus.”

--With assistance from Thuy Ong, Natnicha Chuwiruch and Derek Wallbank.