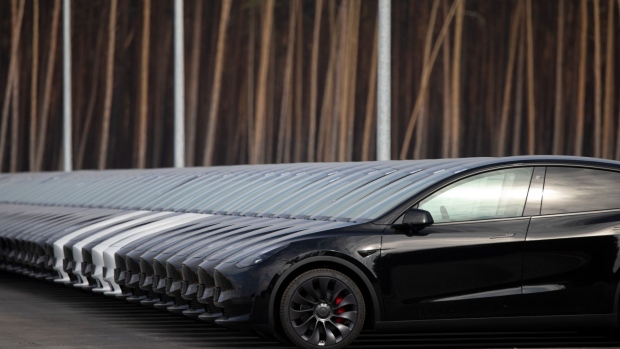 Tesla vehicles at the Tesla Inc. Gigafactory in Gruenheide, Germany, on Saturday, March 19, 2022. Tesla, which secured approval for the factory outside Berlin early this month, said it expected to obtain an operating license within a matter of weeks and has sent out invitations to a delivery day event at the plant on March 22. Photographer: Liesa Johannssen-Koppitz/Bloomberg , Bloomberg

(Bloomberg) -- Former employees at Tesla Inc. asked a federal judge to stop the electric-car maker from pursuing separation agreements with workers it’s laying off, saying it’s just a way to get them to surrender their legal rights.

Tesla is cutting about 10% of its workforce and has offered a one-time severance payment equal to a week or two of wages and benefits, said two workers who sued the company, claiming it’s failing to comply with the Worker Adjustment and Retraining Notification Act that requires 60 days’ notice of pending layoffs.

“The court should not allow Tesla to short-circuit the WARN Act claims that have been filed in this case by seeking to collect releases of that claim while it is being litigated,” the workers said in a motion filed Tuesday in federal court in Austin, Texas.

The workers also asked the judge to invalidate legal releases that employees who were terminated had already signed.

John Lynch and Daxton Hartsfield, who worked at Tesla’s battery factory near Reno, Nevada, for about five years, were among more than 500 employees at the facility that were let go, according to the lawsuit. Both men said they were terminated effective immediately.