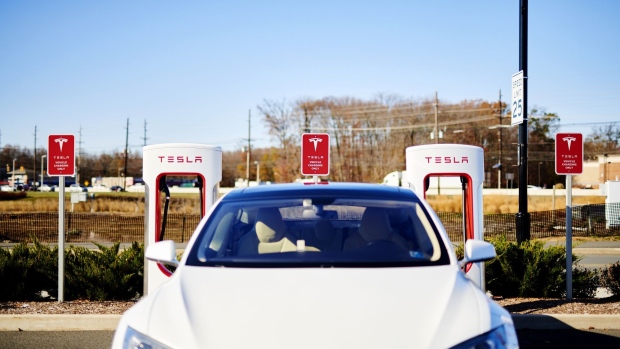 Power companies are loaning out Teslas in Washington, electrifying bus fleets in Virginia and lobbying for electric vehicle tax credits on Capitol Hill.

San Diego Gas & Electric Co. even went so far as to help train salespeople on how to convince consumers to buy electric cars and then paid them as much as US$500 per sale. It’s all part of a US$1.5 billion effort by utilities such as Exelon Corp. and Dominion Energy Inc. to promote vehicles that run on electricity.

The companies see it not just as a chance to sell more power, but to balance electricity demand and meet sustainability goals, said Max Baumhefner, a senior attorney with the Natural Resources Defense Council.

“The grid is built for the one hour of the year when electricity demand peaks,” Baumhefner said. Pushing energy consumption to after hours, when many drivers charge their cars at home, helps smooth out the swings in usage and could even reduce power costs for everyone, he said.

But some aspects of the industry’s campaign -- such as lobbying for tax credits or against President Donald Trump’s rollback of efficiency standards -- put the companies at odds with powerful oil interests. Half of U.S. oil demand is for gasoline.

Electric and plug-in hybrid vehicles are a threat to that, even if they currently account for about 1.4 million, or 0.7 per cent, of the vehicles on U.S. roads. Within five years, BloombergNEF predicts they will represent as many as seven per cent of U.S. car sales due to declining battery costs and a growing number of options.

That’s a promising figure for utilities, which have seen electricity demand flatten as household appliances become more efficient. According to BloombergNEF projections, 10 per cent of electric demand will come from electric vehicles by 2040.

Yet some motorists still have qualms.

“When we did focus groups, customers were telling us, ‘We have apprehension. We’re uneasy,’ whether it’s range anxiety or the upkeep,” said Calvin Butler, the chief executive of Exelon Utilities.

That’s led to some extraordinary efforts on the part of the electric companies to put consumers at ease, such as San Diego Gas & Electric’s collaboration with pro-EV PlugStar to train showroom salespeople.

“Who better to sell somebody on an EV than the salesperson?” said Estela de Llanos, San Diego Gas & Electric’s chief environmental officer.

“By incentivizing some of these dealer employees, we like to think we planted the seed for more of that to happen,” de Llanos said.

An Exelon startup called EZ-EV has helped motorists take test drives, calculate mileage needs and winnow down options -- then score discounts at local dealerships. And motorists who sign up for a monthly car subscription with Exelon’s Steer can shift between electric models, from a Tesla Model X to a Porsche Cayenne.

Utilities also have asked state regulators to approve more than 80 plans for advancing electric vehicles and charging infrastructure, according to Atlas EV Hub, which tracks the efforts. The bulk of the programs - some 78 per cent of the requested initiatives -- have won approval, said Nick Nigro, founder of Atlas Public Policy.

But the proposals are meeting steep resistance from the oil industry, in some cases joined by the Koch-backed Americans for Prosperity and large power consumers wary of higher costs. With about half of U.S. oil demand today tied to gasoline, the sector is fighting electric vehicles on all fronts, from statehouses and state regulatory commissions to Capitol Hill.

In Congress, oil and utility interests have squared off over efforts to expand a US$7,500 tax credit for electric vehicles. The utility industry’s leading trade group, the Edison Electric Institute, has lobbied alongside automakers Tesla Inc. and General Motors Co. to expand the tax credit, while oil interests argue climbing sales and the surge in Tesla’s value show subsidies are no longer needed to jump-start a new industry.

Refiners and their trade associations “have waged a state-by-state campaign” to block utility investments in electric vehicle infrastructure, the Edison Electric Institute said in a May court filing. They are using “all available tools in all available forums to attempt to slow or stop the general move toward electric and other clean energy transportation, which they view as an existential threat.”

“It’s fundamentally unfair to take the monopoly power that the utility has and charge everybody higher rates to build out infrastructure that 2% of today’s purchasers use,” said Derrick Morgan, senior vice president of the American Fuel and Petrochemical Manufacturers. “It’s a very big gamble with other people’s money.”