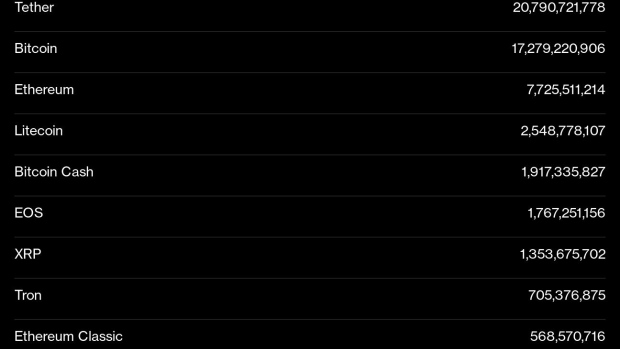 (Bloomberg) -- A class-action complaint accuses the companies behind the stablecoin Tether of “propping and popping the largest bubble in history,” leading to disappearance of $265 billion in cryptocurrency wealth.

Filed in the U.S. District Court for the Southern District of New York on Sunday on behalf of a handful of investors, the complaint accuses the issuer of the stablecoin -- a category of tokens that seek to avoid price fluctuations, often through pegs or reserves -- of manipulating Bitcoin prices.

Because Tether’s owners also own the Bitfinex exchange, the suit alleged, they can execute effectively unbacked Bitcoin buy orders that don’t cost them anything with unbacked Tether. Tether claimed to be backed 1:1 by fiat reserves, but its issuer revealed earlier this year that it may also use other assets to support its value. The buy orders can artificially push up prices in the illiquid crypto market, the complaint said.

“Whatever the case might be and however the court might find the outcome, this suit will bring an unprecedented level of transparency to Tether,” Emin Gun Sirer, an associate professor at Cornell University, said on Twitter. “That’s something that almost everyone will agree is a good thing for the whole space.”

A spokesman for Tether, which is based in Hong Kong, didn’t immediately return a request for comment. On Oct. 5, Tether said on its Website that it “anticipates meritless and mercenary lawsuit based on bogus study.”

“Tether and its affiliates have never used Tether tokens or issuances to manipulate the cryptocurrency market or token pricing,” the statement said.

The lawsuit alleged that the plaintiffs suffered damages as a result of market manipulation. It also accused the defendants of racketeering and intentionally defrauding investors. Roche Freedman LLP, which recently won the lawsuit against Craig Wright, who claims he created Bitcoin, represents the plaintiffs.

Tether is no stranger to legal woes. In April, the New York Attorney General accused the companies behind Tether and Bitfinex of comingling and losing more than $850 million in client and corporate funds.

To contact the editors responsible for this story: Jeremy Herron at jherron8@bloomberg.net, Dave Liedtka, David Glovin