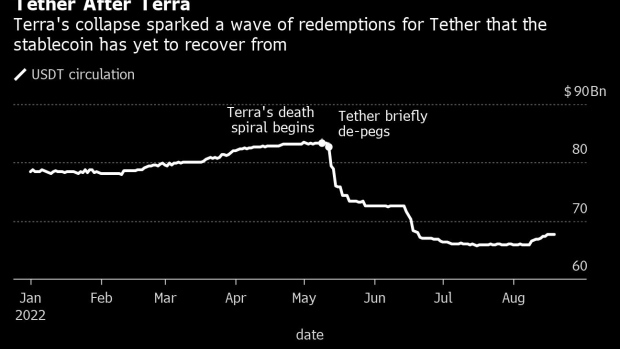 (Bloomberg) -- Tether Holdings Ltd.’s total assets dropped by almost 20% in the second quarter, a report showed, demonstrating the impact of increased redemptions on the stablecoin operator’s cryptocurrency in circulation.

The stablecoin operator had assets totaling at least $66.4 billion as of June 30, according to a so-called assurance issued by the accounting firm BDO Italia on Friday. Tether’s total liabilities amounted to $66.22 billion, of which $66.2 billion relates to the digital tokens that the company has issued.

That compared to assets of $82.4 billion in March, two months before the collapse of algorithmic stablecoin TerraUSD sent the crypto market reeling. During the second quarter Tether experienced its own brief de-peg from the dollar, causing redemptions against its USDT token to spike.

USDT, the world’s most traded cryptoasset with a total circulation of $67.7 billion on Friday, aims to maintain a one-to-one redemption with the US dollar by relying a reserve of cash and cash-equivalents. The quality of assets used by Tether for that reserve have previously been called into question, and regulators globally have turned the spotlight onto stablecoin issuers over a perceived lack of transparency.

In the reserves backing its token, Tether reported $28.9 billion in US Treasury bills, a common asset adopted by stablecoins to provide liquidity with an average maturity of less than 60 days. It held $8.4 billion in longer-dated commercial paper as of the end of June, though an update provided by Tether on Thursday said it had now reduced that figure to $3.7 billion.

The stablecoin issuer said it plans to have offloaded all of its commercial paper by early November, having reduced that figure by 58% during the quarter. As of June 30, around $49.8 million in paper was due to expire between September and December. A further $6.8 billion in assets were held in money-market funds, it added, while $5.5 billion was allocated under “other investments” including cash and bank deposits.

Tether said on Thursday that it began working with BDO as its accounting partner last month, separating from Cayman Islands-based MHA Cayman.

The firm and its affiliated companies began filing quarterly reports to New York on their activities in February 2021, as part of a settlement deal over allegations that it lied about its holdings in prior years. Tether also committed to reducing its holdings of commercial paper, a more controversial asset for liquidity redemption in the eyes of regulators following a 2020 meltdown in the paper market.

After more recent updates on the maturity of its paper holdings raised eyebrows, Tether’s Chief Technology Officer Paolo Ardoino told Bloomberg that the issuer had been re-buying some commercial paper as it expired. It stopped the practice in mid-May, around the time that USDT briefly de-pegged from the dollar and kickstarted a wave of redemptions that knocked around $16 billion off the token’s total circulation.

The upcoming US Stablecoin Bill is expected to set out restrictions on providers buying commercial paper, allow the Federal Reserve to establish a licensing regime for non-bank stablecoin issuers and mandate that they keep 100% reserves. Other regions are considering similar legislation, including in the UK, Japan and Singapore.

An Aug. 8 report by Galaxy Digital highlighted the lack of real-time visibility into Tether’s reserves as an issue for market participants, noting that end-of-period reporting creates “opportunities for Tether to hold riskier assets that can then be replaced with safer assets closer to the end of each quarter”. Tether said on Thursday that it planned to transition toward monthly reports in time, a schedule already adopted by rivals like Circle and Paxos.

In its first-quarter assurance, Tether said it had $5 billion in its “other investments” bracket, which at the time was specified as including digital token investments. Monsur Hussain, an analyst at Fitch Ratings, said the presence of those assets were a concern because it is not known what types of digital tokens are included in those holdings.

“That’s quite a large sum in digital tokens, and we’ve all been watching the market spiral down,” Hussain said in a July interview. During the second quarter alone, the total value of the cryptoasset market fell almost 60% from $2.2 trillion to $892 billion, according to data from CoinMarketCap.

“But maybe they’ve been conservative, and they’ve invested mostly in stablecoins from competitors, perhaps USDC, PAX or Binance,” Hussain added. “That might be why you might not see a significant diminishing in value of the digital token bucket.”