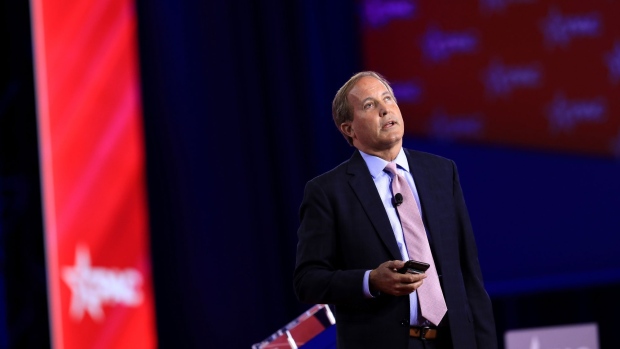 (Bloomberg) -- Texas Attorney General Ken Paxton fled his home with his wife on Monday to avoid being served a subpoena in a legal battle over funding for abortions, according to an affidavit filed in federal court.

A process server was attempting to serve Paxton with a subpoena for a hearing scheduled for Tuesday in Austin. Several abortion rights organizations are seeking a court order barring state officials from pursuing criminal charges against their employees should they resume funding out-of-state abortions for Texas residents.

Ernesto Martin Herrera, who was tapped to deliver the subpoena, said in the affidavit that he arrived at the Paxton residence at 8:28 a.m. on Monday and a woman who identified herself as Angela answered the door and informed him that her husband was on the phone inside, but was in a “hurry to leave.”

Herrera returned to his car outside to wait, and more than an hour later he saw the garage door open and Paxton exiting his home. Herrera walked up the driveway to approach the state’s top attorney, and called his name.

“As soon as he saw me and heard me call his name out, he turned around and RAN back inside the house through the same door in the garage,” he said in the affidavit.

Minutes later, Herrera said, Angela Paxton exited the house and climbed inside of a black Chevrolet truck parked in the driveway. She opened the back passenger door before starting the truck and shortly thereafter Paxton himself exited the house and headed for the truck, ignoring Herrera who had begin to call his name.

Paxton said in a tweet that his actions were driven by concerns for his family’s safety.

The document states that the process server loudly announced that he was serving Paxton legal documents, and placed them in a visible location on the ground. Both Angela and Ken Paxton remained inside the truck and drove away, leaving the documents behind.

Ken Paxton, a Republican, has served as attorney general of the state for seven years. Angela Paxton is a Texas state senator.