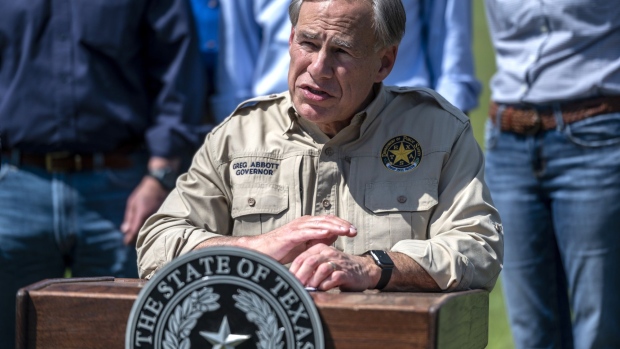 Greg Abbott, governor of Texas, speaks during a news conference in Mission, Texas, U.S., on Wednesday, Oct. 6, 2021. Abbott and Republican state chief executives from around the nation gathered at the border to again call attention to unauthorized immigration across the Rio Grande. , Bloomberg

(Bloomberg) -- Texas Governor Greg Abbott’s latest volley in the culture wars appears designed to stave off ultra-conservative challengers in the upcoming primary, even as it puts him at odds with some of the state’s business leaders.

Abbott’s executive decree forbidding employers from requiring Covid-19 vaccines adds to a push by the Texas Republican Party to devote much of its agenda to culture-war issues such as abortion, transgender school children in sports, gun rights, teaching tied to so-called critical race theory and voting restrictions. The policies are manna for the state’s most conservative voters but often conflict with the fast growing liberal-leaning cities that drive Texas’s $1.9 trillion economy. Abbott, speaking to reporters on Tuesday evening, said he decided on the ban after Biden “bungled” his handling of the vaccine response.

The move is an abrupt turnaround from policies the governor laid out as recently as August, when a spokesperson said that employers were free to require worker vaccines since “private businesses don’t need government running their businesses.” In a state that hasn’t elected a Democratic governor since 1990, analysts say Abbott’s change of heart may have been motivated by a party primary taking place in March, in which he’ll take on two challengers who consistently attack him from the right, former state Senator Don Huffines and Allen West, an ex-Florida congressman.

Huffines, who’s been prodding Abbott for months to ban vaccine mandates, said the governor -- running for his third term in office -- waited too long to act.

“If I were governor we would have already banned vaccine mandates,” he said in an email. “Any businesses who attempted to defy the law would be prosecuted accordingly.”

Abbott’s been fighting a rearguard action against the arch-conservative wing of his own party since the early days of the pandemic. They criticized him for employing what they saw as big-government and anti-business restrictions to slow the spread. As early as July 2020, more than half a dozen Texas county GOP chapters had formally censured the governor for measures including a mask mandate. Last week, the Texas GOP published an open letter urging Abbott to ban vaccine mandates.

While Abbott is vaccinated himself, and said in his executive order that “vaccines are strongly encouraged for those eligible to receive one,” his shift toward more hard-line conservatives “will help him in the primary and that’s what he’s concerned about right now,” said Mark Jones, a professor of political science at Rice University in Houston. “He is concerned about winning a large enough margin to re-validate his status as the undisputed leader of the Texas Republican Party.”

At the same time, Abbott must balance the risk of drawing the ire of Texas businesses that want consistent rules and a healthy workforce. He has painted himself as a champion of corporate America, and can tout successes in luring Oracle Corp., Hewlett Packard Enterprise Co. and most recently Tesla Inc. to move to the state. Texas’s economy is the second largest in the U.S., behind California, and in the past decade its population has grown at more than double the national rate.

Abbott’s actions this year represent a shift in Texas’s informal motto to keep business out of government, according to Steven Pedigo, a public policy professor at University of Texas Austin.

“Things like this executive order particularly flies in the exact face of that,” Pedigo said in an interview.

The Dallas Regional Chamber, a business group, said it supported the rights of its members to decide their own vaccine policy.

“Businesses have a responsibility to protect the health and safety of all employees in the workplace,” the chamber said in a statement. “The DRC supports the choice of each individual employer to do what is best for their company.”

The Texas Hospital Association said its members must have the flexibility to mandate vaccines in their own facilities to protect customers and workers. Houston Methodist, which has more than 25,000 employees in its system of medical facilities, said it was “deeply disappointed” with the governor’s order.

Abbott has faced business objections to several of his most conservative priorities this year. One group, Texas Competes, collected endorsements from 1,400 companies in Texas asking the state government ensure that workplaces and communities “are diverse and welcoming for lesbian, gay, bisexual, and transgender people.” The pledge came in response to a bill that would ban transgender students from competing on school sports teams that don’t align with their sex at birth.

In May, businesses including HP Inc., Microsoft Corp. and American Airlines voiced opposition to Republican proposals that critics said would make it harder for disadvantaged individuals and people of color to vote.

Abbott’s order threatens to embolden vaccine skeptics who already were prepared to resist workplace mandates. The result could be to increase tensions and harden divisions between Texans on either side of the issue as the pandemic approaches its second anniversary. For his part, Abbott said he acted on vaccine mandates to counter federal overreach.

“The Biden administration has left Texans in the impossible position of having to choose between providing for their families or being fired for not getting the Covid vaccine because of their religious belief, medical condition, or personal conscience,” Renae Eze, Abbott’s spokesperson, said in an email. “They have left employers with the unfair choice of either violating federal regulations or losing their valued employees.”

Chad Sterling, the chief executive officer at Altair Global, said the company is sticking with a policy announced last month that all its employees would need a vaccine by Jan. 1. The business, which offers corporate relocation services, is based in Frisco and has about 375 workers in the state.

“We’ve said since the beginning our goal is to be a source of stability for our employees as they go through a crazy time,” Sterling said in an interview. “These battles that are playing out in the government don’t help our employees health, or their mental health.”