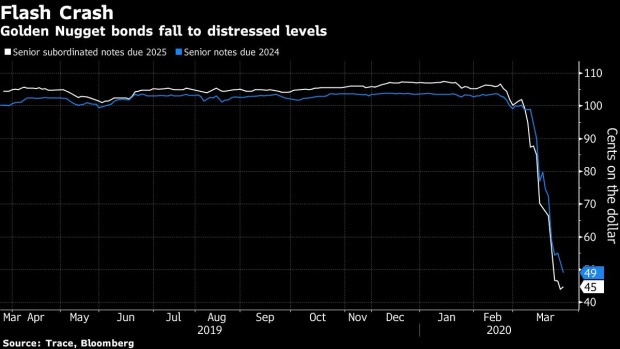 (Bloomberg) -- Last month, on the Friday before the U.S. stock market recorded its worst weekly plunge since 2008, Texas billionaire Tilman Fertitta was beaming.

As he prepared to host an annual Mardi Gras celebration at a beachfront resort outside Houston, business was booming, pushing his personal fortune to more than $5 billion.

A few weeks later -- after the Covid-19 pandemic brought the travel and leisure industry to a virtual standstill -- his casinos and restaurants are shuttered and burning cash, 40,000 of his employees are temporarily out of a job, and a third of his net worth has evaporated.

Few could have predicted the devastating impact that the coronavirus outbreak would have on the global economy. Yet for Fertitta, the use of financial leverage -- the tool that helped him build his riches -- has left the very future of his corporate empire at risk.

“We are trying to survive,” the 62 year-old said in an interview with Bloomberg on Tuesday, warning that the U.S. could plunge into an economic crisis if the authorities don’t allow businesses to reopen in some capacity over the next few weeks. “I have enough liquidity to ride this out. I can’t go forever but I can go for a few months.”

It’s hard to find any part of Fertitta’s business that’s not suffering as a result of the outbreak.

His Golden Nugget casinos have been shut. Hundreds of bustling restaurants he operates under the Landry’s Inc. umbrella -- including Del Frisco’s steakhouse and Bubba Gump Shrimp -- are closed or open for take-out only, generating just 4% to 5% of their usual business.

In his home state of Texas, where Fertitta enjoys near iconic status, one of the worst oil crashes in history is expected to further dampen demand for entertainment and dining.

Even the Houston Rockets, which he acquired for $2.2 billion in 2017 by saddling more debt on his other businesses, are sitting idle after the National Basketball Association suspended its season.

“We are doing basically no business,” the billionaire said in the interview. “I think there have been so many people laid off that it could take up to a year later until we are back to normal.”

Against this backdrop, the nearly $5 billion of junk debt that Fertitta saddled on Golden Nugget -- a holding company for his restaurants and casinos -- has now become an even bigger burden, amplifying the damage caused by every dollar of lost earnings.

Credit-rating company Moody’s Investors Service downgraded Golden Nugget one level to B3 on Tuesday because of the dramatic hit to earnings and rise in key debt ratios expected from the shutdowns imposed to contain the virus. It also warned that further rating cuts could follow if closures last longer than anticipated.

Debt investors are also getting anxious.

Golden Nugget’s bonds are already trading at deeply distressed levels, having plunged more than 50 cents since the beginning of the month. The company’s subordinated notes trade at 45 cents on the dollar, while more senior bonds trade near 49 cents, according to Trace pricing data.

Only two months ago, sentiment in the credit market was so robust that debt investors allowed Fertitta to double the size of a debt-funded dividend he was taking from the company to $200 million. Golden Nugget was also able to lower the interest rate on a $2.4 billion existing loan, which has since tumbled to around 60 cents, according to data compiled by Bloomberg.

For his part, the billionaire is confident the company will have access to enough cash to ride out the storm. He has been talking to banks about beefing up liquidity and is even considering buying back some of the deeply-discounted debt with his own funds once things turn around.

This year, his restaurants and casinos were expected to generate well over $700 million of cash, more than enough to pay $250 million to service the debt and invest as much as $200 million in new projects, he said.

“That leaves you with around $300 million of free cash flow,” he points out. “I don’t think it’s a bad business model.”

The market turmoil has shrunk Fertitta’s estimated net worth by about a third since last month, bringing his calculated fortune on the Bloomberg Billionaires Index to about $3.2 billion Tuesday. The decline was enough to bump him off the ranking of the world’s 500 largest fortunes.

A sizable portion of Fertitta’s fortune -- including the Rockets, his hotel properties and his personal cash -- are held separately from Golden Nugget, and therefore isolated from any claims creditors of the company might have. Still, he says he can make extra cash for Golden Nugget available if needed.

“I had a call from somebody this week who asked if I would sell 50% of the Rockets for $1 billion and the answer was no,” he said. “I could have gotten $1 billion, but I don’t need it.”