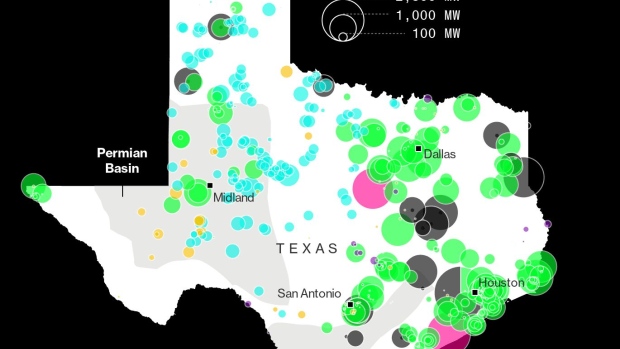 (Bloomberg) -- Cold and ice is set to sweep Texas, raising the risk of power outages and boosting energy demand in what will be the biggest test to the state’s electric grid since last year’s catastrophic blackouts.

Temperatures in Midland, the business heart of the oil- and-gas-rich Permian Basin, will drop to 16 degrees Fahrenheit (-9 degrees Celsius) Wednesday night and stay below freezing until at least Friday, the National Weather Service said. Temperatures there won’t moderate until this weekend, said Marty Rausch, a forecaster at the U.S. Weather Prediction Center.

In Dallas, lows will be 17 degrees on Thursday and Friday, San Antonio will fall to low 20s, and even Houston could reach 29 degrees before readings start to rebound. The cold weather will raise demand for electricity and natural gas, while a widespread ice storm set to sweep the region in the next 24 hours could knock out power in many places as tree limbs and wires fall.

The state’s grid operator, the Electric Reliability Council of Texas, on Tuesday predicted a peak demand of 71,242 megawatts Friday morning -- a level that has never been seen outside of summer before. A year ago, demand was also poised to climb to an all-time high before widespread outages during a winter storm darkened the state for days and lead to the deaths of more than 200 people.

“We are doing our best to make sure this doesn’t have to happen again,” said Jim Wright, of the Texas Railroad Commission, the regulator that oversees the oil and gas industry in the state. “I guess this weekend will be a test. We still have a lot of room to try to improve.”

Natural gas futures soared above $5 in the U.S. as forecasts showed a deep freeze returning in mid-February after this week’s cold blast, intensifying concerns about tight supplies of the heating and power-plant fuel.

The deep freeze expected in Texas is part of a large storm crossing the U.S. that has triggered winter storm warnings, watches and weather advisories from New Mexico to Maine. Chicago could get as much as 12 inches (30 centimeters) of snow, which could be enhanced with lake effect accumulation as well, Rausch said.

Cancellations have hit several Midwest airports hard, including Chicago and St. Louis. Nearly 3,000 flights have already been scrubbed, according to FlightAware, an airline tracking service. Southwest Airlines Co. suspended operations in St. Louis on Wednesday and in Dallas on Thursday due to the winter storm.

A large area from the Rocky Mountains to Maine could get heavy snow through Friday, Rausch said. South of the snow line, ice will collect on wires and tree branches, which together with winds gusting as high as 35 miles (56 kilometers) per hour, could trigger widespread power outages across the central U.S.

An ice storm warning is in effect from late Wednesday through early Friday from eastern Arkansas to central Kentucky.

A winter storm warning has also been issued for southwest Ontario, according to Environment and Climate Change Canada. Toronto, the most populous Canadian city, is also under a weather advisory, with as much as 20 centimeters of snow expected by Thursday morning.