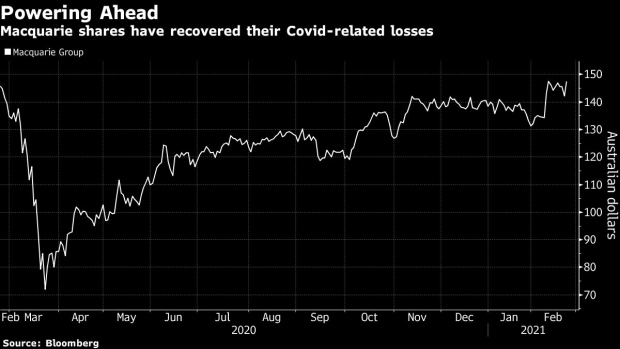 HOUSTON, TEXAS - FEBRUARY 21: A view of high voltage transmission towers on February 21, 2021 in Houston, Texas. Millions of Texans lost power when winter storm Uri hit the state and knocked out coal, natural gas and nuclear plants that were unprepared for the freezing temperatures brought on by the storm. Wind turbines that provide an estimated 24 percent of energy to the state became inoperable when they froze. (Photo by Justin Sullivan/Getty Images) , Photographer: Justin Sullivan/Getty Images North America

(Bloomberg) -- The Texas deep freeze that upended the U.S. energy market has delivered Macquarie Group Ltd. a windfall of as much as A$270 million ($210 million) amid wild gyrations in gas and electricity prices.

The Sydney-based investment bank on Monday raised its profit forecast, citing increased demand for its gas and power supply services in the U.S.

Macquarie is the second-biggest physical gas supplier in the U.S. behind BP Plc, and typically moves gas between different parts of the country based on last-minute customer needs.

Last week the bank profited as its major clients -- including energy companies -- sought to buy and move higher-than-expected volumes of gas and electricity to their customers amid the crisis in Texas, according to a person with knowledge of the matter. The price of physical gas, which is normally less than $3 per million British thermal units, skyrocketed to as much as $1,250 in some locations last week.

As the cold blast froze oil and gas wells, sent electricity prices to record highs and caused blackouts for 5 million homes and businesses, more of Macquarie’s customers ordered gas for Texas that had to be shipped from other parts of the country, the person said.

A Giant Flaw in Texas Blackouts: It Cut Power to Gas Supplies

Macquarie’s commodities business is unusual among banks in the U.S., where counterparts such as Goldman Sachs Group Inc. and Morgan Stanley have had to curb commodities trading activities to satisfy regulators. But Macquarie, which expanded its commodities operations by purchasing Cargill Inc.’s power and gas trading business in the U.S. in 2017, doesn’t trade commodities with its own balance sheet, the person said.

In its profit upgrade, Macquarie said the “extreme winter weather conditions in North America have significantly increased short-term client demand for Macquarie’s capabilities in maintaining critical physical supply across the commodity complex and particularly in relation to gas and power.”

After two weeks ago saying earnings in the year ending March 31 will be “slightly” down on last year’s result, Macquarie on Monday forecast profit would now be up 5%-10%. That implies net income of about A$2.87 billion ($2.3 billion) to A$3 billion, compared to A$2.73 billion a year earlier.