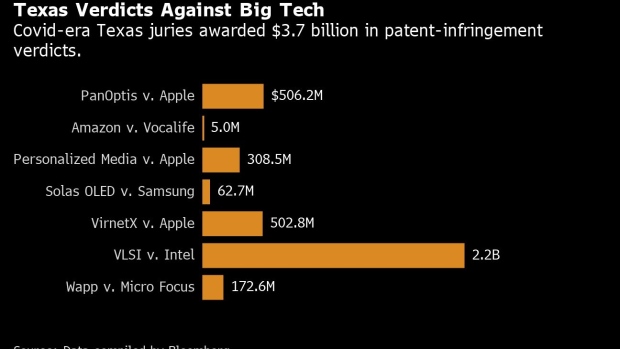 (Bloomberg) -- The coronavirus pandemic halted most jury trials of patent disputes as courts closed across the country -- except in Texas, where socially distanced juries have churned out a series of multimillion-dollar verdicts over the past year.

More than $3.7 billion has been awarded to patent holders in just seven Texas trials held since courts started shutting down a year ago. The state’s courts have long been known for some big verdicts, but “it’s been 10 years since we saw these kind of verdicts come one after another,” said Geneva Clark, patent legal data expert with the research firm Lex Machina.

The large verdicts reflect a changing attitude among jurors, because of both the pandemic and the tarnished charm of Silicon Valley, legal experts say.

“Jurors don’t have a lot of tolerance for nonsense now, because they’re literally putting their lives on the line to do their civic duty,” Robert Hirschhorn, a veteran Texas jury consultant, said in an interview. “They also have all this pent-up frustration from everything during the pandemic.”

Ask Apple about its last seven months’ experience in Texas. Combined, three juries walloped the iPhone maker with more than $1.3 billion in damages and royalties. That’s less than two days’ sales for the tech giant, but rather than face a fourth Texas jury that had already been selected, Apple settled with Japan’s Maxell Holdings Ltd. after seven years of fruitless licensing talks.

Hundreds of new patent-infringement lawsuits are flooding into courthouses in such Texas towns as Marshall, Sherman, and Waco, in bids to make lightning strike again and again. As a result, local jurors “are clearly getting acclimated” to whopping awards, Hirschhorn said, raising the stakes for future trials.

“Billions are the new millions,” he said.

Of the 4,060 U.S. patent suits filed in 2020, more than a fifth were filed in the Western District of Texas, according to Lex Machina. The Eastern District ranked third, after Delaware, where many companies are incorporated, with almost 10% of new cases filed.

The two busiest patent judges in the U.S. are U.S. District Judge Alan Albright of Waco, and U.S. District Judge Rodney Gilstrap of Marshall. All but 64 of the 857 patent cases filed in the Western District landed on Albright’s desk, while Gilstrap took in 252 of the 395 patent cases filed in the Eastern District. Gilstrap dominated patent litigation for many years prior to Albright’s appointment in late 2018, though his court has subsided some after a 2017 U.S. Supreme Court ruling limited where suits could be filed.

Gilstrap was one of the first to restart jury trials last year, after retrofitting his courtroom with Plexiglass shields and ordering participants to self-quarantine and use masks and hand sanitizers. He said he feared the backlog of deferred trials would prove a bigger challenge than containing Covid-19, which was on the wane in his somewhat remote town.

“We can’t just sit and wait until Covid is eradicated off the face of the earth and there’s zero percent chance that anybody will get it,” Gilstrap said in an interview.

Albright, a former intellectual property attorney, is popular with patent owners because he refuses to consider patent-eligibility questions early in cases that can lead to quick dismissals in software cases, Lex Machina’s Clark said.

“There’s been a huge shift in Texas -- a lot of companies moving to Texas,” and particularly to Austin, about 100 miles south of Waco, Clark said. “Some cases would not have even been brought at all but for the opportunity to be in a plaintiff-friendly venue.”

Sociologist Stephen Klineberg at Rice University in Houston says he’s also seeing a rise in “antagonism toward big business and big incomes” in his 40th annual poll of Texans on a broad range of social topics, which will be released in May.

“There’s a new populism,” Klineberg said. “People are coming to the recognition of a new inequality, with the rich guys getting richer and richer. There’s the sense the little guy is getting screwed.”

Hirschhorn, who works with both plaintiffs and defendants, said Texas jurors naturally sympathize with the underdog, especially when they think a large corporation has ripped off a small inventor’s hard work.

“In Texas, they’re not going to let you stomp on the little guy,” Hirschhorn said.

Companies like Facebook, Google and Apple that were once consumer favorites have seen their reputations tarnished by privacy concerns, data breaches and allegations of monopolistic or arrogant corporate behavior, Hirschhorn said. They seem to have “a bulls-eye on them,” he said.

Now, Intel faces that same conundrum with a trial starting April 12 in Waco on a second tranche of patent claims by VLSI Technology LLC. On March 2, a Waco jury told the chipmaker to pay $2.1 billion over two patents that VLSI had bought from Dutch chipmaker NXP Semiconductors Inc. VLSI, which doesn’t make its own products, has a third trial against Intel slated in Waco in June.

“Even if some of these huge damages awards are whittled down in appeals -- and there is good reason to think that many of them will be -- it is still an annoyance big tech companies would rather not deal with,” said Tamlin Bason, a Bloomberg Intelligence analyst who specializes in patent issues.

To be sure, there’s no guarantee the patent owners will always win. Alphabet Inc.’s Google won a November trial in Marshall in a case over video streaming, and Roku Inc. fended off a Florida company’s royalty demands in Albright’s first trial as a judge.

“Big Tech still does have some leverage -- namely ample resources to litigate and the ability to challenge validity at the U.S. Patent Office -- that could keep the nuisance level relatively contained,” Bason said. “Still, it is possible there’s an uptick in pre-trial settlements in cases that are on the margins.”

That message? “Texas remains a very desirable place to go to trial, particularly against defendants with deep pockets.”