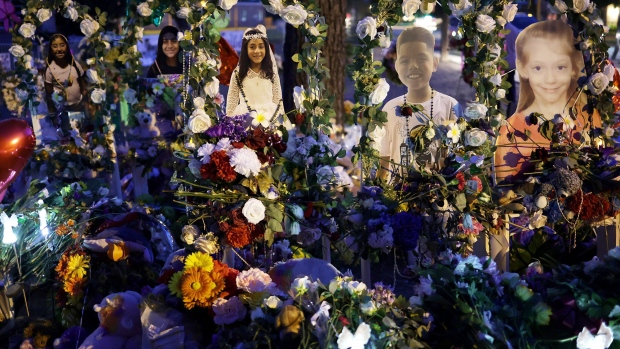 Flowers and photographs are seen at a memorial dedicated to the victims of the mass shooting at Robb Elementary School on June 2, 2022 in Uvalde, Texas. , Photographer: Alex Wong/Getty Images

(Bloomberg) -- A cadre of Texas Republican donors broke with party orthodoxy to declare their support for some gun-control measures in the aftermath of the school shooting in Uvalde that killed 19 children and two teachers.

The US needs to expand background checks for firearms purchases and strengthen so-called red-flag laws that can be used to take guns away from unstable individuals, the group wrote in an open letter published Sunday in the Dallas Morning News. The more than 250 signees identified themselves as “conservatives” and “gun enthusiasts” who “believe in the Second Amendment.”

The full-page advertisement was paid for by Todd Maclin, a former head of commercial banking at JPMorgan Chase & Co. who now runs a finance firm in Dallas. He told the Texas Tribune that the recent shooting compelled him to show his support for “reasonable things that can be done” to reduce the risk of gun violence.

The letter -- which praised efforts by Republican US Senator John Cornyn to work on bipartisan legislation -- was also signed by billionaire Robert Rowling, the chairman of Trt Holdings Inc., and Ray Lee Hunt, the billionaire executive chairman of oil and gas producer Hunt Consolidated Inc.

Republicans have mostly resisted calls for stricter gun controls in the aftermath of last month’s massacre in the town of Uvalde, in which an 18-year-old armed with a powerful rifle slaughtered schoolchildren before being shot dead by law enforcement. But even officials in reliably gun-friendly Texas are facing a wave of public pressure as details about the killing and the inept police response trickle out.

The proposals supported by the group of Republicans fall short of what Democrats have sought when it comes to gun control.

“The issues are very complicated and demand thoughtful non-political solutions,” the letter said. “There are many of us across these great United States. We are organizing.”

Everytown for Gun Safety, which advocates gun-safety measures, is backed by Michael Bloomberg, founder and majority owner of Bloomberg LP.