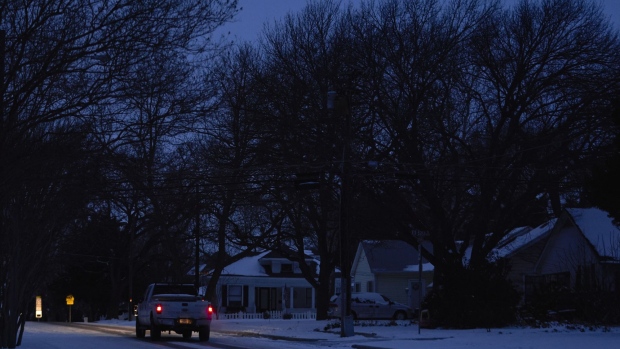 A truck drives down the street during a power outage in McKinney, Texas, U.S., on Tuesday, Feb. 16, 2021. The energy crisis crippling the U.S. showed few signs of abating Tuesday as blackouts left almost 5 million customers without electricity, while refineries and oil wells were shut during unprecedented freezing weather. , Bloomberg

(Bloomberg) -- Texas Governor Greg Abbott is pushing regulators to strengthen incentives for fossil fuel and nuclear power generators in an effort to avoid a repeat of deadly blackouts seen this winter.

Abbott ordered the Public Utility Commission of Texas to redesign parts of the power market to maintain and build more dispatchable supplies that are fueled by coal, natural gas and nuclear, according to a letter Tuesday. Generators that can’t guarantee their availability, like wind and solar, should bear the costs of failures, he said.

Without those costs, it creates “an uneven playing field between non-renewable and renewable energy generators,” Abbott said in the letter.

Texas is scrambling to revamp its power markets as the grid becomes increasingly strained by climate change. In February, an Arctic freeze crippled the state for nearly a week and left more than 100 dead amid the catastrophic blackouts that left millions in the dark. This summer, the region faces the threat of more power failures as scorching heat drives up the use of air conditioners.

But while other grid operators, like in California, are emphasizing batteries and other ways to back up renewable power sources, Abbott’s order appears to double down on maintaining the grid of the past that relies on larger fossil fuel and nuclear plants.

The PUC is already mulling some of the changes Abbott ordered, such as how to ensure adequate resources and spur the development of transmission lines. The difference is that the governor appears to be focused on picking winners rather than letting the market dictate those changes in the generation mix, though the language in his order does leave room for interpretation, said Josiah Neeley, Texas director at R Street Institute.

Texas had enough power-generating capacity in February, but “the problem was that the capacity we had wasn’t usable because of the weather,” said Neeley.

“This focus of trying to pit fuel types against each other has nothing to do with the February event and it is inconsistent with the basic market set up, which is to deliver needed power at the lowest price.”

Abbott said that wind and solar should be assigned costs for reliability, but it’s unclear whether operators of fossil fuel, coal and nuclear would also have to shoulder the costs for their own plant failures. During the February freeze, natural gas was in short supply after pipelines and equipment froze and power outages forced production slowdowns.

The governor also asked the PUC to order the state’s main grid operator to speed up the build out of transmission lines tied to dispatchable resources, such as existing and new nuclear and fossil fuel plants.

In the letter, Abbott said the PUC should instruct the state’s grid operator to establish a maintenance schedule for natural gas, coal, nuclear and other non-renewable electricity generators. The February crisis caught generators by surprise, hitting at a time when many were down for maintenance.