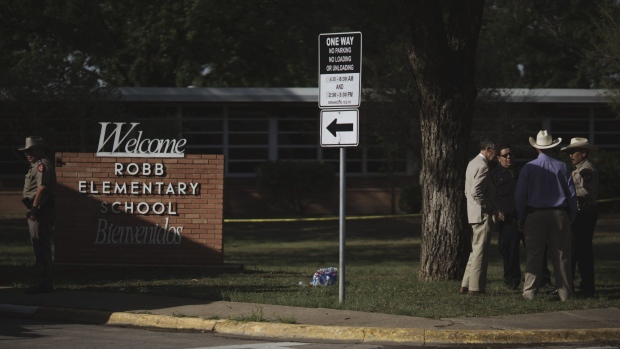 Law enforcement officers outside Robb Elementary School in Uvalde, Texas, US, on Tuesday, May 24, 2022. An 18-year-old gunman opened fire Tuesday at a Texas elementary school, killing at least 18 children, officials said, and the gunman was dead. , Bloomberg

(Bloomberg) -- The 18-year-old gunman who killed 19 children and two teachers at a school in Uvalde, Texas, warned about his plans in social media posts in the minutes before the attack, according to Governor Greg Abbott.

After the gunman shot his grandmother, she called police who pursued the gunman to the school, where he crashed his truck, then got out and went inside. After shooting children and school staff members, he barricaded himself in a classroom and was shot dead by a Border Patrol agent.

“The messages Gov. Abbott described were private one-to-one text messages that were discovered after the terrible tragedy occurred,” Stone wrote on Twitter. “We are closely cooperating with law enforcement in their ongoing investigation.”

Meta is still reeling from fallout related to the trove of internal documents that whistle-blower Frances Haugen shared with journalists and authorities that suggested Facebook prioritizes profit over content moderation. The US Congress and federal enforcement agencies have spent the last several years formulating their own plans to hold Facebook to account, with little action so far.