Analysts said that while the cautious commentary will probably disappoint investors who were hoping for a second-half recovery, Texas Instruments is still executing well despite tough market conditions. Several banks raised their price targets on the stock and Morgan Stanley said the company’s candor with investors bolstered its credibility.

Shares of Texas Instruments rose 0.5 per cent at 9:44 a.m. in New York, erasing an earlier decline of as much as 1.3 per cent. The stock has gained more than 30 per cent off its December lows as the semiconductor sector rallied to record levels earlier this month. Chip stocks were mostly higher Wednesday with the Philadelphia Semiconductor Index rising 0.4 per cent.

Here’s what Wall Street is saying:

Texas Instruments’ comments suggest “business is subseasonal” with limited visibility for the second half of the year. Moore said this is in line with his prior view and comments from other companies like Infineon.

“We don’t think they are seeing anything different from anyone else around 2Q, but they are more matter-of-fact in their approach,” he said in a note to clients.

“TI is executing well in tough conditions and their candor should bolster credibility,” but valuation “leaves little room for upside.” At the same time, he said “it’s hard to see numbers coming down much more given how much revenues have already fallen.”

Rates equal-weight, price target raised to US$106 from US$100 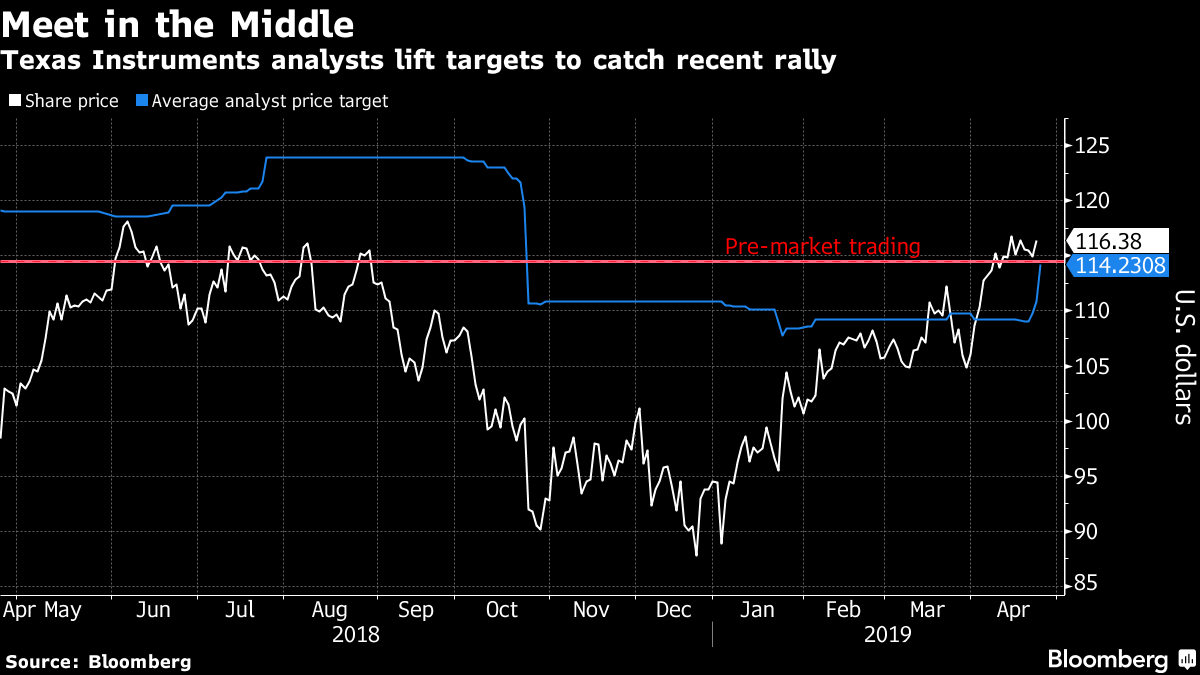 “TXN’s report, guide, and warning that typical down-cycles yield 4-5 quarters of negative y/y comps should serve as a reminder that ‘snapback’ expectations may prove to be premature in this down-cycle.”

“While we continue to expect TXN to execute well during this period of depressed demand, we believe the shares to be fully valued.”

“While we believe investors have been prepared for the possibility of further weakness (and the initial reaction to the print/guide appeared positive) the news that all of the upside in the quarter was driven by communication infrastructure took some of the air out of it, particularly given company commentary that amply demonstrated they are expecting it to correct at some point.”

A “flat” forecast may also be a sign the rest of the business isn’t strengthening, which would reduce optimism about a recovery, Rasgon said