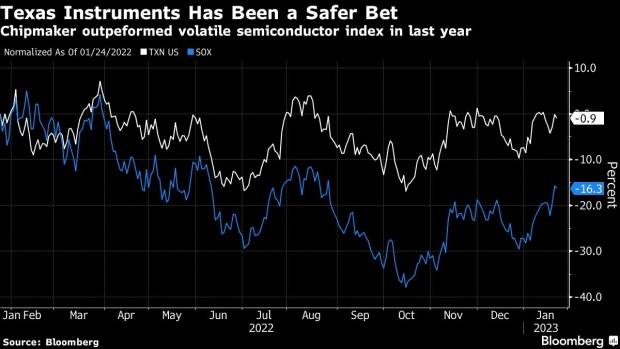 (Bloomberg) -- Texas Instruments Inc., one of the world’s largest chipmakers, suffered its first sales decline since 2020 and gave a tepid forecast for the current quarter, hit by an industry slump.

The outlook suggests that Texas Instruments may not bounce back quickly from its sales slowdown. Wall Street expects revenue to decline throughout 2023 as the company’s customers focus on reducing their stockpiles of used chips, rather than ordering new ones.

Texas Instruments has the longest list of customers and broadest range of products in the $580 billion industry, making its projections an indicator of demand across the economy. It’s also one of the first major technology companies to report results during the current quarterly earnings season.

The company is confident that long-term trends in electronics will increase the need for semiconductors, but isn’t offering any predictions on when orders and revenue might rebound.

“I wish I knew,” Chief Financial Officer Rafael Lizardi said in an interview. “Customers have done what they’ve done for decades — and will continue to do — they’ve built a little too much inventory. We’ll see how long that takes to work itself out.”

Unlike some large technology companies, Texas Instruments has no plans to reduce its headcount to cut costs, he said. The company didn’t get ahead of itself and hire a lot of people during the past two years, he said.

The sharpest sales declines have been felt by chipmakers catering to the computer and smartphone industries. Companies such as Intel Corp. and Nvidia Corp. have reported steep drops in revenue as their customers cut purchases in an attempt to burn through unused stockpiles. Carmakers and producers of industrial systems — which struggled to get enough supply during the pandemic — have still been ordering at a healthy rate. But analysts have speculated that it’s only a matter of time before they start cut back too.

“As we expected, our results reflect weaker demand in all end markets with the exception of automotive,” Chief Executive Officer Rich Templeton said in the statement.

The Philadelphia Stock Exchange Semiconductor Index, which lost 36% of its value in 2022, has rallied 15% this year as investors put money back into industry-related equities. But Texas Instruments, which was a relatively strong performer last year, has lagged gains by its peers in 2023.

Despite its reputation as a bellwether, Texas Instruments executives typically avoid giving long-term predictions or much detail on what they’re hearing from their customers. Instead, they prefer to discuss long-term plans, such as spending on in-house production of analog and embedded chips, and efforts to return cash to investors.

Fourth-quarter earnings amounted to $2.13 a share, Texas Instruments said, compared with a $1.97 estimate. Revenue declined 3.4% to $4.67 billion, breaking a run of double-digit percentage increases stretching back to 2020. Analysts had projected $4.61 billion.

Such chips generally require less advanced production than Intel processors or other digital products. That focus has allowed Texas Instruments to become one of the most profitable companies in the industry and to devote its cash to dividends and share buybacks.