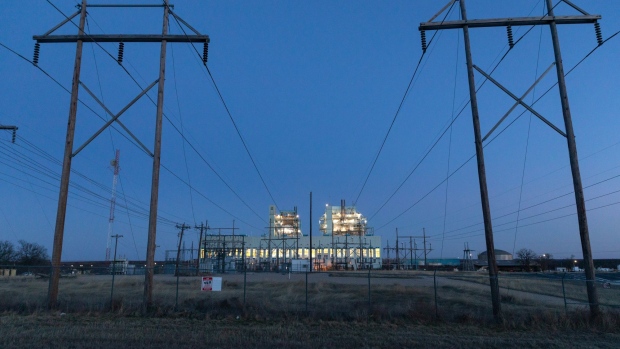 (Bloomberg) -- Texas came uncomfortably close to another round of rolling blackouts Tuesday night because grid operators misjudged the weather.

The Electric Reliability Council of Texas, which manages most of the state’s grid, had counted on a mild cold front sweeping the state to lower demand for power. That didn’t happen. As a result, demand on the grid was about 3,000 megawatts higher than anticipated -- or the equivalent of 600,000 homes.

The forecasting error, coming as 25% of power generation was offline for seasonal repairs, was another grim reminder of the vulnerability of Texas’s grid. Two months ago, a deep winter freeze knocked out almost half the state’s generating capacity, leaving millions of people in the dark for days. But Tuesday’s weather was hardly extreme, and the close call has raised questions about whether the grid operator, known as Ercot, can prevent a repeat of the February energy crisis.

“It’s a disgrace for a power grid in modern times to struggle to keep the lights on during a mild day,” said Daniel Cohan, an associate professor of environmental engineering at Rice University. “We’ll be in trouble when a summer heat wave comes in and demand is one-and-a-half times as much as it was yesterday.”

Weather typically usually doesn’t have a big impact on electricity demand in spring and fall. Those are the so-called shoulder seasons when customers are neither cranking their heaters nor blasting their air conditioners. On Tuesday, temperatures in Dallas, Brownsville and Houston were moderately higher than normal, reaching or exceeding 80 degrees Fahrenheit (27 Celsius). That, combined with a dearth of generation, prompted Ercot to ask for conservation efforts for almost four hours.

“Yesterday was an odd day,” said Matt Rogers, president of the Commodity Weather Group LLC in Bethesda, Maryland. “There were thunderstorms in West Texas that kept wind generation lower than normal. They are going to have another West Texas wind dip today, but not as much as yesterday.”

Ercot officials emphasized during a press call Tuesday that the amount of generation down for maintenance wasn’t unusual for this time of year, as utilities often schedule repairs for the spring when weather is mild and demand is lower. They added that solar and wind generation came in lower than expected Tuesday, a claim that may be used as ammunition by Texas lawmakers who view renewable energy as inherently less reliable than that from fossil fuels.

“We have close to half of our state’s thermal generation offline for maintenance, and that’s what killing us,” he said, referring to coal, gas and nuclear plants. “We have plenty of generation in the state, but it has to run.”

The coming weekend may present another test for grid operators. Temperatures are set to dip into the 40s across Dallas, Fort Worth and Austin and fall to the 50s in Houston and San Antonio. While hardly the frigid readings that sparked the winter crisis in Texas in February, that could drive heating demand that’s largely powered by electricity in the state.“That’s chilly for them for late April and could invoke a bit of overnight to morning heating demand,” Rogers said.