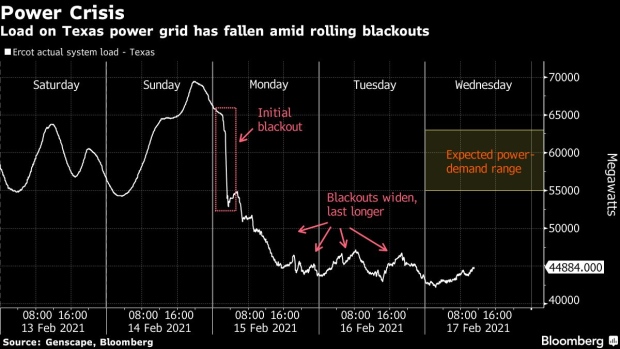 (Bloomberg) -- The power crisis that has knocked out power to millions of homes and businesses in Texas and across the central U.S. for days is getting worse, with blackouts expected to last until at least Thursday.

Texas’s grid operator cut power to 2.8 million homes Wednesday morning, just hours after restoring service to 700,000 households. Load on the state’s power system fell overnight to the lowest level since early Monday, when the agency instituted rolling blackouts to keep the grid from total collapse amid an extreme cold blast. The data signal that the agency has made little to no progress in getting the lights and heat back on.

While the agency was able to bring 1 gigawatt of power back onto the system during the past hour, about 46 gigawatts remains offline as of midday Wednesday, -- enough to power 9.2 million homes.

“The current energy crisis is much bigger than most people realize. This is a global crisis,” Paul Sankey, an oil analyst at Sankey Research, wrote in a note. “The largest energy outage in US history. In the middle of a brutal winter, globally. Stay tuned, this crisis is just starting.”

As the outages expand beyond Texas to neighboring power systems, as many as 3.4 million customers across three states are now without electricity, according to PowerOutage.US, which tracks utility outages. That’s more than 10 million people, based on the size of the average household.

When the adjacent grid operated by the Midcontinent Independent System Operator declared an emergency as well, the Electric Reliability Council of Texas, which manages the state’s main grid, failed to import about 600 megawatts of power, it said in a statement Wednesday.

The Texas operator now expects the blackouts to last until at least Thursday, but didn’t comment on whether any of the 185 power generating units that shut down in recent days have returned to service.

About 40% of the state’s generation capacity is offline, according to the grid operator. Of that, 28 gigawatts is thermal generation such as gas and coal that shut due to frozen instruments, limited gas supplies and low gas pressure. Frozen turbines and icy solar panels have shut 18 gigawatts of renewable energy. Bringing that generation back online is critical to restoring service, said Ercot Chief Executive Officer Bill Magness, in a briefing Wednesday.

Power supplies weren’t the only issue for Texas’s grid.

Adam Sinn, owner of trader Aspire Commodities LLC, stayed up all night Sunday scouring the grid operator’s website for clues as to what would happen next. He noticed that the flow of power on Texas’s grid -- called frequency -- dipped from 60 hertz to 59.3, a level that can automatically force power plants to trip offline. Frequency is typically only allowed to deviate by 0.02 hertz to maintain grid stability.

“The grid requires instantaneous supply-demand balance close to 60 hertz with a very narrow error margin,” said Devin Hartman, director of energy and environmental policy at Washington-based R Street Institute. “In the event of a sudden imbalance, grid operators enact a set of procedures to restore balance, with the last resort being the controlled curtailment of service.”

While it’s still not clear what caused the dip, it’s possible that initiating rolling blackouts sooner could have helped contain the problem, Sinn said.

Energy prices continue to surge as the crisis deepens. Wholesale power prices in Texas traded at the $9,000-per-megawatt-hour price cap for a fourth day, while natural gas spot prices breached the $1,000 mark, more than 100 times their level just a week earlier.

The cold blast that triggered the energy crisis is slowly abating but across eastern Texas, parts of Arkansas and through the South to Alabama, as much as a quarter-inch of ice could form on trees and power lines, causing even more outages, said Lara Pagano, a forecaster with the U.S. Weather Prediction Center. By next week, temperatures across Texas could rise above freezing and reach the 40s and 50s Fahrenheit.