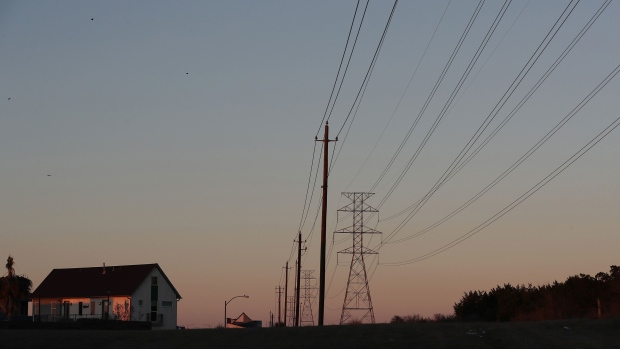 AUSTIN, TEXAS - FEBRUARY 19: Electric power lines run through a neighborhood on February 19, 2021 in Austin, Texas. Amid days of nationwide frigid winter storms in which 58 people died, more than 4 million Texans were without power for much of the past week, with about 13 million Texans being forced to boil tap water in the aftermath of the strain on infrastructure. (Photo by Joe Raedle/Getty Images) , Photographer: Joe Raedle/Getty Images

(Bloomberg) -- The Texas power grid and the natural gas drillers, wind farms and solar arrays that supply it are facing their second test in a less than a month as sub-zero weather bears down on the Lone Star state.

Temperatures in wide swaths of the second-largest U.S. state are forecast to plunge to well-below normal in coming days, according to the National Weather Service.

The freeze will arrive little more than two weeks after the first arctic blast of the year crippled an as-yet undetermined number of gas wells, processing plants and other equipment vital to ensuring the steady flow of fuel to electricity generators.

During the early January chill, more than 10% of Texas gas production was knocked offline over a two-day period, according to BloombergNEF data. It was the most severe cut since the infamous February 2021 disaster that killed more than 200 people and paralyzed the state for the better part of a week.

“It is important to remember, however, as we have consistently stated, that some variation in production occurs with sudden temperature changes -– these are field operations, not controlled factory settings,” Todd Staples, president of the Texas Oil and Gas Association, said in an email.

Gas wells are particularly susceptible to so-called freeze offs because of the high volumes of subterranean water that typically flow out of the ground alongside the fuel. Wind installations also can be knocked offline by intense cold while overcast weather and snow disrupt solar-power output.

“If we experience another severe winter storm before operators have weatherized their equipment, the grid could be at risk again,” said Virginia Palacios, executive director of watchdog group Commission Shift.

The impending chill may also roil oil markets depending on the extent of freeze offs in the Permian Basin, North America’s largest crude field. Any supply hiccups typically create dislocations in regional oil prices before rippling into the broader oil-futures market.

During this month’s earlier cold snap, West Texas crude rallied to a two-week high as buyers scrambled for supplies.

The Texas Railroad Commission, which oversees oil and gas production in the state, didn’t immediately respond to a request for comment.