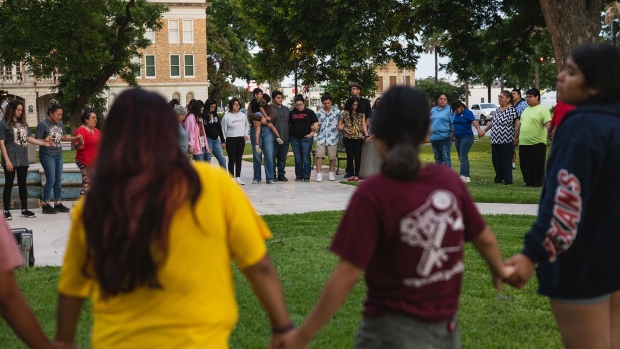 Members of the community gather at the City of Uvalde Town Square for a prayer vigil in the wake of a mass shooting at Robb Elementary School on May 24, 2022 in Uvalde, Texas. , Photographer: Jordan Vonderhaar/Getty Images

(Bloomberg) -- The latest US mass shooting at a Uvalde, Texas elementary school creates a new point of political pressure on a U.S. Supreme Court that has signaled it will soon limit state and local governments’ ability to enact gun control measures.

The dispute, New York State Rifle & Pistol Association Inc. v. Bruen, is the oldest outstanding case currently pending before the justices, having been argued back in November. Tuesday’s mass shooting may affect the timing of the ruling should a justice want to reference it in their opinion, but the justices aren’t likely to delay the release due to optics, legal scholars say.

“It’s hard to find a time to issue an opinion expanding gun rights that won’t be marred by a mass shooting,” said Second Amendment scholar and UCLA law professor Adam Winkler. “We have a lot of mass shooting in the United States. They seem to happen every few weeks, depending on how you count them they tend to happen even more frequently.”

There have been 213 mass shootings in 2022 alone, according to the Gun Violence Archive, which tracks online gun violence incidents and defines a mass shooting as an event in which four or more people are killed or injured with a firearm. The attack Tuesday that left 19 children and two teachers dead came 10 days after a gunman killed 10 people in a racist attack at a supermarket in Buffalo, N.Y., the state in which the case before the justices originated.

The Bruen case, argued in Nov. 3, challenges New York’s strict limits on the right to carry a concealed gun. New York is one of eight states with what’s known as “may issue” laws to conceal carry. Licenses may be granted but only if the applicant can show “proper cause.” New York state courts have defined that as a special need for self-protection that’s distinguishable from that of the general public. The New York State Rifle & Pistol Association, which is an affiliate of the National Rifle Association, argues New York can’t stop ordinary law-abiding citizens from carrying handguns outside the home for self-defense under the Second Amendment.

Releasing an opinion that strikes down the law and expands gun rights, as many think the court will do, in the wake of two high profile mass shootings targeting Black grocery store shoppers and elementary school students risks further eroding public support of the court.

The court’s approval rating dropped by 10% after a draft opinion striking down the constitutional right to abortion was leaked to Politico last month, according to a poll conducted by Marquette Law School shortly thereafter. It was the first time in the court’s modern history that the public had seen a draft of a decision ahead of its final release. The opinion, authored by Justice Samuel Alito, sparked protests outside of the justices’ homes. The Marquette survey found 55% of Americans disapprove of the court and 44% approve of the institution.

Winkler said it’s possible that some people may think the court is choosing the wrong time to expand gun rights.

“It’s not just that the Supreme Court is issuing a ruling on gun rights at this time, but a ruling that’s going to vastly expand gun rights, that’s going to tell states like California, New York and Massachusetts you have to throw away 100 years of gun safety laws in the name of a conservative vision of the Second Amendment,” he said. “It’s the substance of what the Supreme Court does that will have the most impact.”

Case Western Reserve University School of Law professor Jonathan Adler, however, is skeptical the court’s decision in this case will have any significant impact on the public’s perception of the court. He said people who care about gun rights in one direction or another are already locked into their opinions and preferences.

The justices have said in the past that they issue opinions as they are ready, without consideration to events outside of the courtroom.

“The justices are not likely to be focused on the news cycle when releasing the opinion,” Winkler said. The only reason the two mass shootings in Buffalo and Uvalde could create a delay, he said, is if a justice decides to reference it in their opinion or dissent, possibly as an explanation for why there needs to be more guns safety regulations.

“It’s always possible it could slow down the issuance of a decision as justices wish to make mention of these mass shootings in their opinion, but other than that I think the court is sort of willfully blind to what’s happening in the news when releasing its opinions.”

The court doesn’t announce on or ahead of opinion days which cases will be handed down.

There has been at least one notable exception.

In 2015, the Supreme Court announced that it would issue decisions on a Friday—an unusual opinion day. The day, June 26, turned out to be the anniversary of two landmark LGBTQ rulings, United States v. Windsor, striking down the federal Defense of Marriage Act, and Lawrence v. Texas, striking down state sodomy laws. The court issued another landmark gay rights ruling in Obergefell v. Hodges that day, affirming the right to same-sex marriage.

Adler said that timing was likely driven by Justice Anthony Kennedy, who authored all three of the rulings expanding LGBTQ rights and retired from the court in 2018.

“We don’t have a lot of evidence that the current court modifies the timing or has sought to modify the timing of releases,” he said.

While the recent shootings could impact the timing of the court’s decision, a representative for Gun Owners of America said the courts shouldn’t delay its decision because of these events.

“We need the court’s decision now more than ever,” said Aidan Johnston, the group’s federal affairs director. “In recent weeks we have seen gun-free zones and conceal carry permit laws disarm people on the New York subway, disarm shoppers in Buffalo, NY, and we’ve seen the Gun-free School Zone Act disarm and leave vulnerable our children. We need to be able to carry firearms in self-defense now.”

An advocate for gun safety laws said she hopes the justices will consider the Uvalde shooting when writing their ruling and the impact that a decision expanding the right to firearms in public spaces could have.

“I am an optimist and, even in the wake of such tragedy, I like to think the members of the court are human, have children, will be impacted,” said Esther Sanchez-Gomez, senior litigation attorney at Giffords Law Center.

Though the court is likely in its final stages of revising the decision in the Bruen case, she said “it’s not done until it’s done.”