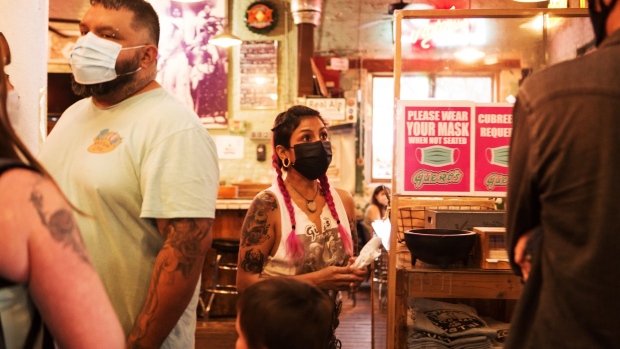 (Bloomberg) -- Texas anticipates an unexpected budget surplus as tax-collections rebound along with the nation’s economy, causing it to boost revenue forecasts for the next two years.

The state expects to end the current budget cycle in August with a $725 million surplus, a sharp reversal from the nearly $1 billion deficit it was expecting in January, according to estimates released Monday by Comptroller Glenn Hegar.

The state now projects it will have $115.7 billion of revenue available for general-purpose spending during the biennium that begins in September, about $3 billion more than estimated in January.

“The state’s economy is in better shape today than it was back in January,” Hegar told reporters, attributing the turnaround to the success of the vaccine roll-out and the decline of coronavirus cases. “It was a much more cautious outlook than it is today.”

Texas is among states across the U.S. whose finances are rapidly mending as the economy emerges from the pandemic, with rising stock prices and unprecedented federal stimulus efforts boosting tax revenue. On top of that, states are set to receive a massive influx of aid under President Joe Biden’s rescue plan.

“The increase in Texas revenue estimates is consistent with what we’ve seen in other states and with the national economic improvement,” said John Ceffalio, senior municipal research analyst at CreditSights Inc.

Texas’s largest source of revenue is the sales tax because it doesn’t have an income tax. Those sales taxes have been propped up by residents shopping and dining out since virus-related restrictions were lifted. The state brought in $3.4 billion of sales taxes in April, a record and 31.4% more than April 2020, according to Hegar’s office.

“Spending this March affecting April tax collections was supported by widespread business reopenings and the lifting of capacity restrictions, greater consumer confidence in going out as the vaccine rollout progressed, federal stimulus checks and spending delayed from February into March due to the winter storm and power outage,” Hegar said in a statement Monday.